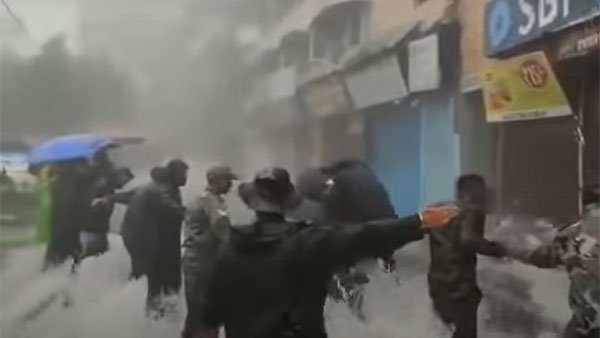 The viral video shows water gushing onto a road dangerously as soldiers take civilians, stuck in a building, to safety. The men in uniform are seen forming a human chain and holding hands to save people from being washed away.

Sharing this some Twitter users claimed that it was a scene from Rajasthan’s Sri Ganganagar. “Indian Army comes to the rescue amid the flood situation in Ganganagar,” wrote a user.

India Today Anti Fake News War Room (AFWA) has found these claims to be misleading as this video is neither a recent one nor from Sri Ganganagar. The rescue operation was carried out by the Indian Army last year in Nainital, Uttarakhand.

According to a report in Amar Ujala published on October 20, 2021, several tourists were trapped inside local stores on the main road after the famous Naini lake overflowed, following heavy rainfall. The Army was at the spot to rescue them.

Aaj Tak published a report on October 19, 2021, mentioning several labourers had died in Nainital’s Ramgarh due to the flood. The situation worsened after Nainital lake overflowed, forming a strong current towards the Bhowali and Haldwani routes.

Subsequent searches with keywords led us to the same rescue video uploaded by CNN-News18 on October 19, 2021. The video report noted that the Army rescued at least 36 people trapped in local shops and it took them over 14 hours.