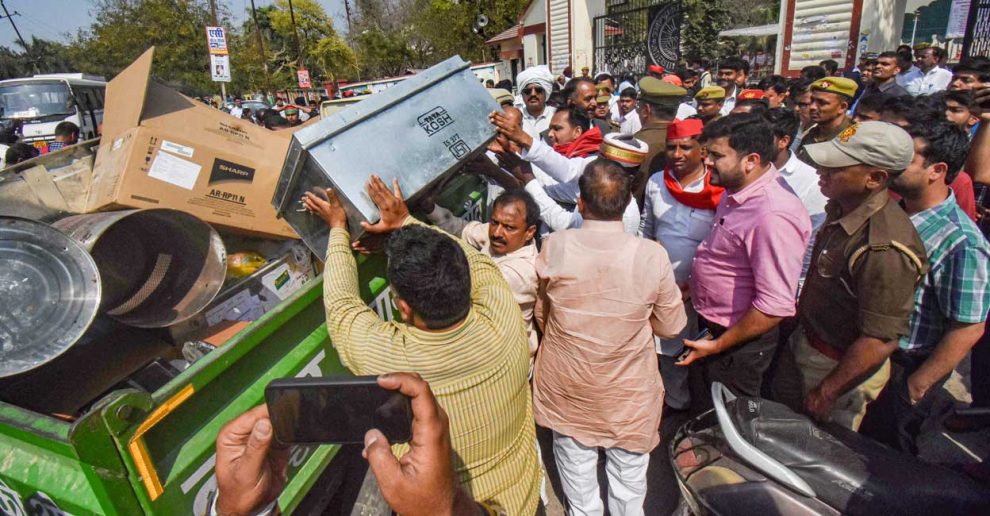 The video of a man tied to a chair by a sloganeering group has gone viral on social media. Those sharing this clip have claimed that the restrained man is a councillor who never visited his ward after winning the polls. When he returned to seek votes for a rerun, the locals abducted him.The original audio of this 20-second clip was replaced by an old Bollywood track.

India Today Anti Fake News War Room (AFWA) has found these claims to be misleading. The Varanasi councillor was not tied up for the reason explained in the viral posts. The residents forced their tied-up representative to sit in the flooded street in protest against inefficient sewage management in the locality.

We ran a reverse search of the screengrabs from the viral video as there were no reports that supported the claim. This took us to multiple media reports from November 2020 that unfolded the real story.

A report by Amar Ujala from 21 November 2020 identified the man as Tufail Ansari, councillor of ward number 79 of the Varanasi Municipal Corporation. The article noted that a local outrage against waterlogging in the neighbourhood resulted in the ‘kidnap’ of their representative.

As per a report by Jagran, the streets of Ambika Mandi were flooded with sewage water for a long time, making lives difficult. They accused Tufail Ansari of not acting on their complaints despite repeated requests. Thus, they forced Ansari to sit on a chair in the middle of the sewage water.A video report by the TV9 Bharatvarsh from November 22 showed the residents of the area raising slogans against the Yogi Adityanath administration for neglecting their concerns.

We reached out to Tufail Ansari who blamed the civic body for the situation that led to the incident. “Sewage water stagnated in the locality for almost two months. Neither the municipal authorities nor the water supply body responded to my plea. The locals vented their anger at me and made me sit there for almost an hour,” Congressman Ansari told India Today.The drains were later changed and the situation has improved,” he added.Varanasi, the constituency of Prime Minister Narendra Modi, will go into the Municipal polls at the end of this year. The last municipal election was held in 2017.