Fact Check: Video of a flooded neighbourhood in Haryana's Rohtak shared as from Delhi - Govt.in - Telling the truth- always! 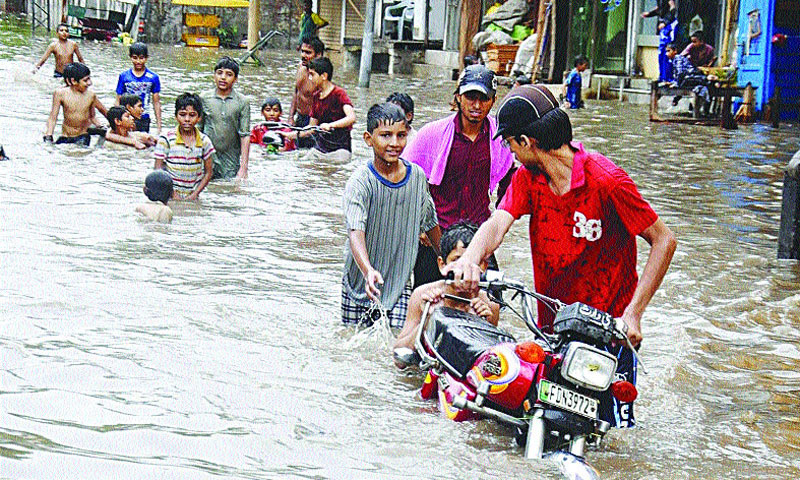 Delhi received over half the amount of rainfall that it normally does over the entire month of July within a day of the monsoon’s arrival this year on Thursday, state reports. According to the IMD, Delhi is expected to receive moderate rain during the upcoming week.Meanwhile, a video was shared by some users on social media that purportedly showed the unendurable condition of Delhi roads following the recent showers. In the video, civilians are seen wading through hip-deep water while a few others push a stuck SUV.

The archived version of the claim made by a verified account can be seen The India Today Anti Fake News War Room (AFWA) has found that the claim is misleading. This video was not shot in Delhi but in Haryana’s Rohtak in June 2022.

All available reports stated an overcast sky and moderate rainfall in the Capital since Thursday. There were no reports of flooding of such intensity anywhere in the capital city.We checked the frames of the video for clues next. A close look partially revealed the initial letter of the vehicle being pushed by a few men in the video. It was ‘H’ and not ‘DL’.

Towards the end of the 32-second video, a name board over one of the closed stores also becomes visible. It read ‘Chopra Electricals’.

Combining the two available clues, we ran a Google search for establishments named ‘Chopra Electricals’ in Haryana and Himachal Pradesh. The top result was a store in the Rohtak district of Haryana.

Using Google Maps, we looked for matches for the video from Rohtak’s Huda Complex where the shop is located.

At the beginning of the video, the number “P-25” was visible on one of the pillars of the overbridge as a young lady passes by. The same number was spotted on a beam near the electrical shop on Google Maps as well.

A Jio outlet was visible adjacent to the electrical store in the video. The Google Map of the locality confirmed the shop immediately next to Chopra Electricals is indeed a Jio Digital Life store. The hoardings of both the stalls in the video were available here as well.

We were also able to match other beams and vertical plant lines below the flyover visible in the video with images of Huda Complex on Google Maps.

With the location confirmed, we contacted Asish Chopra, the proprietor of Chopra Electricals next to assert if the deluge was recent or otherwise. Asish told India Today the video was from June 30, 2022, and accused the local administration of not running the drainage pump properly — resulting in a flood-like situation despite no excess rainfall in the area so far.

Further investigation revealed the AAP’s Haryana unit had released a video from the same neighbourhood from the eventful day on their Twitter page.

“In Rohtak, Haryana, the whole city was submerged in a boat-like situation,” the Hindi caption of the tweet from July 1 read. They further accused the state government of being corrupt in the video.Thus, it is clear that the video of flooded roads shared as being from Delhi is originally from Haryana’s Rohtak.