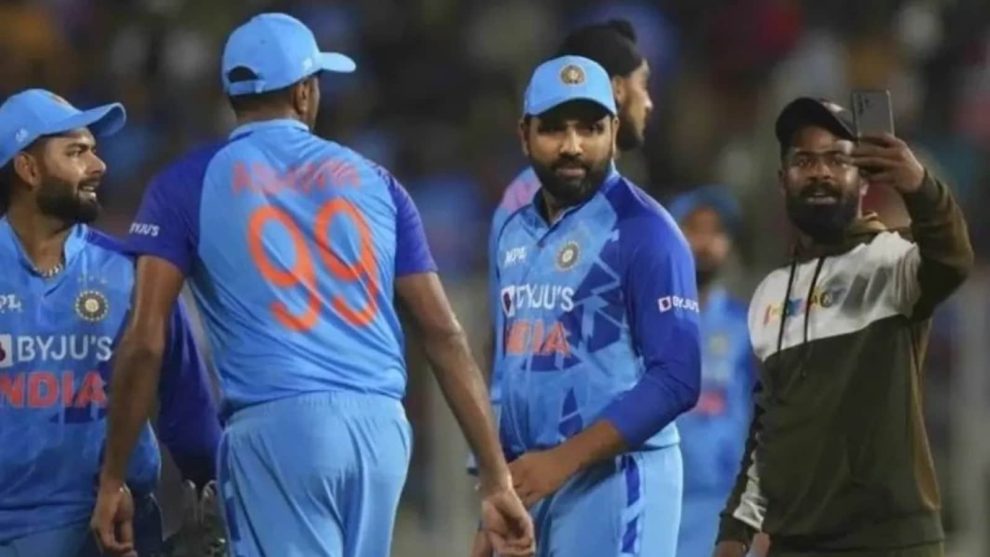 India on Wednesday recorded an eight-wicket win against South Africa in what was the opener for their final series before the T20 World Cup. Arshdeep Singh and Deepak Chahar did the damage with the new ball, picking five wickets for just nine runs in three overs before Surykaumar Yadav continued his sublime batting to wrap up the 107-run chase with 20 balls to spare. With the win India managed to take a 1-0 lead in the three-match contest.

During the tense low-scoring encounter at the Greenfield Stadium, a fan managed to breach security to meet India captain Rohit Sharma. The fan had made his way into the ground in Thiruvananthapuram in bare foot and immediately touched Rohit’s feet to pay tribute to the star India batter. He then managed to take a selfie with the Indian captain as well. The pictures immediately went viral all over social media.

Talking about the match, it was a dominating win for India. When Rohit had opted to bowl first after winning the toss, it did feel that the pitch would aid the pacers, but not to extent that Arshdeep and Chahar inflicted on the visitors. South Africa however bounced back on the batting abilities of Keshav Maharaj to finish with 106 for eight.

In response, India lost Rohit for a duck and Virat Kohli for just three runs off nine balls while KL Rahul looked at complete discomfort as well. But Suryakumar seemed to have batted on a different pitch alltogether as he smashed five boundaries and three sixes in his 33-ball 50 to help India wrap up the chase in style. He was however, ably aided by Rahul’s 56-ball 51.