Floods leave behind a trail of devastation in Varanasi - Govt.in - Telling the truth- always! 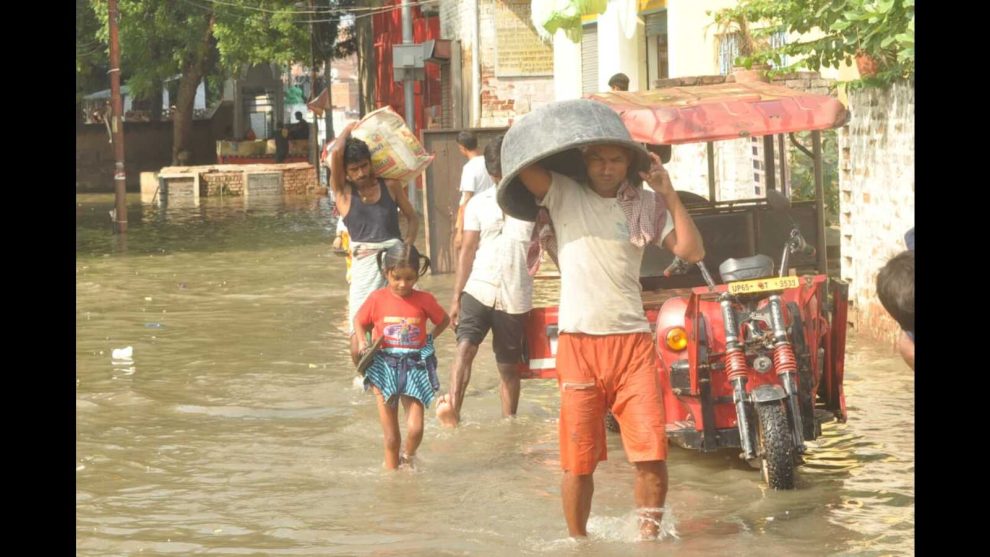 The flood waters have started receding but they have left behind a trail of devastation.

Those displaced are forced to spend their nights on the ghats, others have lost agricultural lands. Some have lost their looms. “We are hand to mouth now,” those affected by the floods said. As per records available with the district administration the floods affected more than 15000 people.

Ram Krishna, a marginal farmer who hails from Gadhwa Ghat area is one such farmer, who said he has lost everything. “Babua kuchhau naahi bacha (I have nothing left),” he said while pointing out that the agricultural fields he had, were lost to the floods.

Dinesh Sahni, a boatman, too said he had lost everything. “Sahab hum to navik hai (sir, I am a boatman),” he said and added that left with no option he has been living on his boat along with his family.

Sahni said they were already hit hard due to ban on boating during floods and were completely devastated when the flood waters ravaged his living space too.

“We are boatmen and solely depend on boating to earn our livelihood. But, due to this boating ban, we just don’t have any other means of livelihood,” he added.

Weavers too have been hard hit. Mohammed Ghizaal, a traditional weaver who hails from Jaitpura locality of Varanasi said his mud house couldn’t withstand the floods. “As flood waters surged in, we had to rush out to a safer place, leaving everything, including raw material and loom behind. In just a few minutes, everything was finished. I had never imagined that the floods would hit us too as our locality had never been affected during previous floods,” he said. Jaitpura locality is home to about 500 weavers, big and small. Apart from Jaitpura, more than two dozen localities dominated by weavers in and around the Ganga also were hit by the flood. These include Kunia, Saraiyan, Selputri, Chirwa Ghat, Nakhi Ghat, Kuchwa Ghat, Puranapull.

More than two dozen other localities including Maruti Nagar, Saraiyyan, Dhelwariya, Purana Pull, Chauka Ghat, Bagwa Nala and Selputri temple too have been affected due to floods.