From the Urdu Press: Death of justice for Bilkis and Jalore outrage to jettisoning of Gadkari, Shivraj and BJP vs AAP - Govt.in - Telling the truth- always! 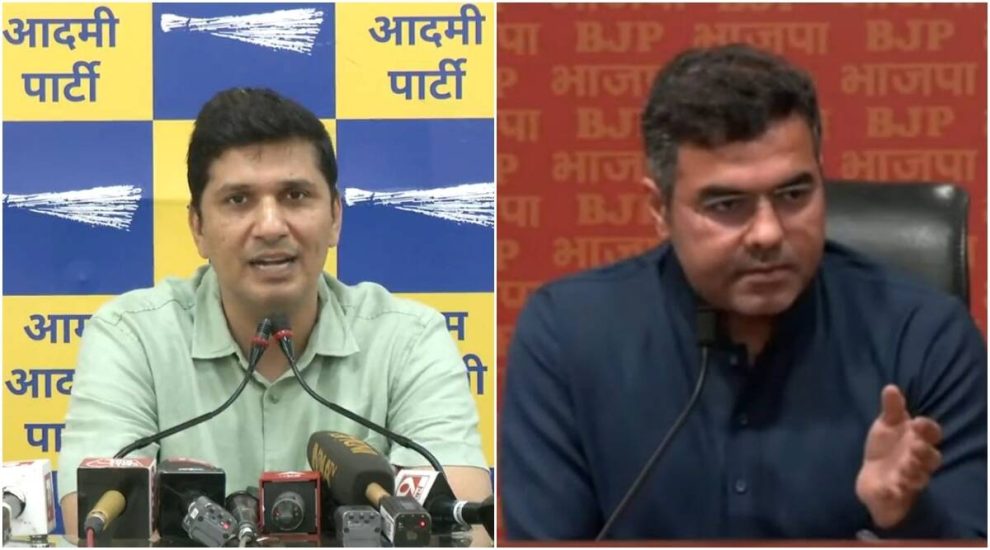 The Gujarat government’s ‘disgraceful’ decision to set free all 11 convicts has not only left the Bilkis family numb but also convulsed the country, the Roznama Rashtriya Sahara writes, saying that ‘The citizens who trust the justice system can hardly believe that a government can release those convicted of such heinous sexual crimes and killings’How can justice for any woman end like this?” This question raised by Bilkis Bano turned into a resonant refrain in the Urdu press as the Gujarat government let all the 11 men convicted of gangraping Bilkis Bano and slaughtering 14 members of her family, including her three-year-old daughter Saleha, during the 2002 Gujarat riots walk out of a jail on remission on August 15. Highlighting Prime Minister Narendra Modi’s Independence Day speech urging the citizens not to do anything that lowers the dignity of women, the Urdu dailies asked the PM to turn his resolve into reality by intervening in the Bilkis case and ensuring that the convicts are sent back to prison. Flagging the death of Jalore’s Dalit boy Indra Kumar Meghwal, who was assaulted by his upper-caste teacher for drinking water from his pot, the dailies drew an analogy with similar outrages recounted by the iconic B R Ambedkar, even as they underlined the staggering scale of unfulfilled tasks that the nation must undertake to realise the essential constitutional promise of equality and freedom.

Commenting on the release of 11 men who were convicted of gangraping Bilkis Bano and killing 14 members of her family, including her three-year-old daughter, during the 2002 Gujarat riots, the multi-edition Roznama Rashtriya Sahara, in its editorial on August 19, writes that on Independence Day when the country was celebrating Azadi ka Amrit Mahotsav and Prime Minister Modi was, in his address to the nation from the ramparts of the Red Fort, hailing women greatness and calling for respecting women, the convicts in the Bilkis case walked out of a Godhara jail to be garlanded and feted. “On August 15, a BJP government panel in Gujarat, PM Modi’s home state, granted remission to 11 convicts serving life imprisonment,” it notes, adding that the Gujarat government’s “disgraceful” decision has shocked and shaken the country. “The citizens who trust the justice system can hardly believe that a government can release those convicted of such heinous sexual crimes and killings.”

The Gujarat government’s move has not only left the Bilkis family numb but also convulsed the country, the daily says. It points out that Bilkis was five-month pregnant when she was gangraped and her family members killed by a mob while they were fleeing their village to save themselves from the inferno of post-Godhra communal riots that was then sweeping through the state. “In the face of such horrific crimes and staggering odds, Bilkis fought a long battle to secure justice and send the perpetrators behind the bars. After Bilkis approached the National Human Rights Commission, the Supreme Court intervened in the case. She has continued to receive death threats. Her family has change home 15 times to save themselves. The trial in the case was shifted out of Gujarat to Maharashtra on the apex court’s order. The CBI court’s verdict convicting the perpetrators was upheld by the Bombay High Court in 2017 and the top court awarded compensation of Rs 50 lakh to Bilkis in 2019. She had then hailed the Supreme Court by saying that it has understood her pain and grief.”

In May 2022, however, the top court, hearing a remission plea by one of the convicts, asked the Gujarat government to decide it, which led to the state government setting up the panel that ordered the release of all 11 convicts, the edit says, calling it a travesty of justice and a defeat for those who have faith in it. “This is more painful given the PM’s claims regarding his commitment to the cause of dignity and empowerment of women.”

The Food and Drug Administration ordered vaccine makers to tweak their shots to target BA.4 and BA.5 that are better than ever at dodging immunity from earlier vaccination or infection.

In the second part of its editorial under the title “Naya Bharat, Purana Bharat (New India, Old India)” on August 19, the New Delhi-edition of Inquilab highlights the case of the nine-year-old Dalit boy from Rajasthan’s Jalore, Indra Kumar Meghwal, who was allegedly assaulted by his upper-caste teacher and school owner Chail Singh for drinking water from a pot reserved for him, pointing out how the boy’s family desperately rushed him from one hospital to another across Rajasthan and Gujarat over 25 days before he breathed his last in an Ahmedabad hospital. “Consider where we stand?” it writes, asking whether we will be able to build a new India without reforming the existing India marked with such centuries-old inequalities, discrimination and violence.

Such atrocities against the Scheduled Caste and Scheduled Tribe communities in the country are not new, it notes, quoting B R Ambedkar as recalling in his short autobiographical work, “Waiting for a Visa”, that “While in the school I knew that children of the touchable classes, when they felt thirsty, could go out to the water tap, open it, and quench their thirst… But my position was separate. I could not touch the tap; and unless it was opened for it by a touchable person, it was not possible for me to quench my thirst.” The edit says our history has been saturated with the oppression of people from vulnerable and backward classes over thousands of years.

In its August 19 leader on the ruling BJP’s shake-up, the Hyderabad-based Siasat says that by dropping Union minister Nitin Gadkari and Madhya Pradesh Chief Minister Shivraj Singh Chouhan from the BJP Parliamentary Board, the saffron party has sent out a clear signal that it is only PM Modi and Union home minister Amit Shah who will continue to call the shots in the party and that any other leader regardless of his seniority will have to remain within bounds. By excluding Gadkari from the BJP’s highest decision-making body, a message has been given to him, it writes, adding that a signal has also been given to the RSS that it is not necessary for the BJP high command to always abide by its wish regarding the induction and continuance of functionaries in key party positions and that the party dispensation can take its own call on various matters.

As regards Chouhan, the daily says, a reality check regarding his political stature has been provided to him in the run-up to the 2023 Assembly elections. It points out that the four-time CM Chouhan is a BJP heavyweight, who was once even compared with the then Gujarat CM Modi when the party was trying to pick its PM face. However, Modi won that race, and the rest is history. “Modi and Shah have firmly tightened their grip on the BJP so much now that red lines have been drawn for party leaders not to indulge in airing their independent or dissenting views lest they will be stripped of their roles in the organisation or government,” it states. Chouhan is drawing the Opposition Congress’s jibes that he has been cut down to size and that the BJP leadership may leave him in the cold both at the state and central levels in the coming months. The BJP may downplay his ouster from the top BJP panel, but there has been a growing disquiet in the Chouhan camp that feels this decision has “made his political future uncertain”, the edit says.

Speaker Meira Kumar’s recent remarks that 100 years ago her father Babu Jagjivan Ram was also prohibited from drinking water in his school from a pitcher meant for “Savarna Hindus”, when his life was somehow saved, and that he faced casteist slurs and humiliation even when he was the Deputy PM. It also quotes Kumar as saying that she was asked about her caste while looking for a place to rent even in London. “Kumar liked the house. But then the landlord asked her, ‘Are you a Brahmin?’ She said, ‘No, I’m not a Brahmin. I belong to the Scheduled Caste. Do you have a problem?’ He said, ‘No, no, I don’t have a problem.’ But he did not rent out the house to her.”

The biting truth is that such rampant caste discrimination and violence borne out by countless cases have perennially bedevilled the nation and that not much has been done to wipe it from the face of the country, the daily says. The political class has cynically used Dalits and weaker sections as just their vote banks in every election without effecting real changes in their lived reality. “The crucial question is, how will a new India be built without clearing such terrible debris from old India.

The Bengaluru-based Salar, in its editorial on August 21, points out that the alleged irregularities in the rollout of the new excise policy of the Arvind Kejriwal-led AAP government in Delhi has given an opportunity to the CBI to go after Deputy CM Manish Sisodia, who swears by probity. Besides lodging an FIR against 15 accused including the DCM, the CBI conducted raids at multiple places in several states, including Sisodia’s residence. The veracity of these allegations against Sisodia could be ascertained only after a thorough and impartial probe, even as there has been bad blood between the AAP dispensation and the Lt Governor, who reports to the BJP-ruled Centre, for long, the edit says.

The CBI’s probe against Sisodia was recommended by current L-G V K Saxena on the basis of the chief secretary’s report… Sisodia however got a head start by declaring himself that the central agency has raided his house and asserting that ‘hum kattar imaandaar hain (we are very honest people)’. While claiming that they were brightening the future of lakhs of children, he also said it is very unfortunate that those who do good work are harassed like this and this is why our country has not been able to become No. 1,” the daily writes. The CBI’s role in this case will remain under scanner given its dismal track record, it says, even as a war of allegations and counter-allegations rages between the AAP and the BJP on the political front.