Gehlot-Dhankhar banter on Mamata: ‘What magic did you do on the tough lady?’ - Govt.in - Telling the truth- always! 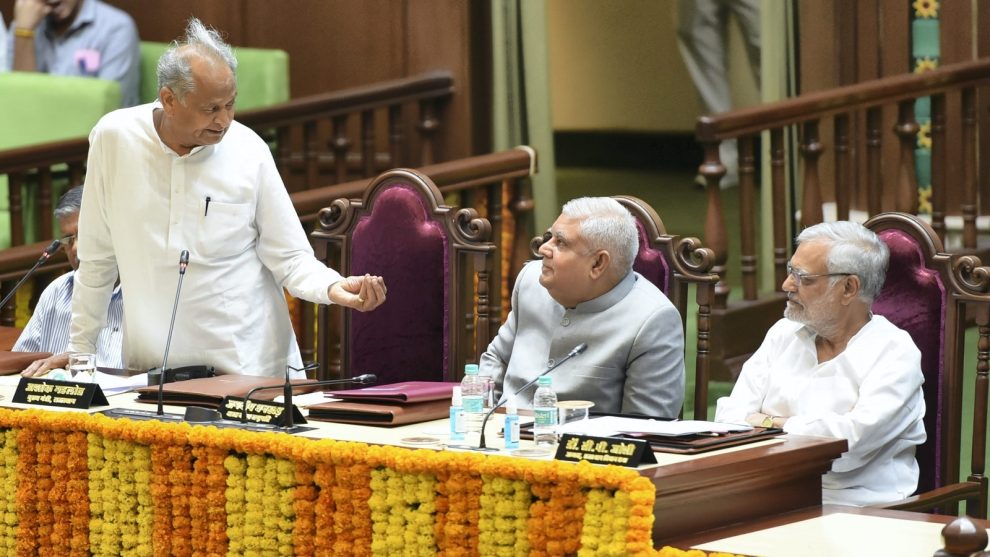 During a felicitation programme in the Rajasthan Assembly, Gehlot asked Dhankhar, a former Bengal governor, what “magic” he did on a “tough lady” like Banerjee that she decided to abstain from voting during the vice-presidential elections held in August.

In his address at the event, the Rajasthan CM spoke about the relation between Dhankhar and Banerjee during the VP’s three-year tenure as the governor of West Bengal.

“Your relations were the topic of discussion in the country till the time you were there for three years. What magic did you do that when you became the vice-presidential candidate, the same Mamata Banerjee abstained from voting? Please tell us the secret,” Gehlot asked Dhankhar.

The Rajasthan CM further asked if the VP was a “bigger magician” than him.

In his reply, Dhankhar, who can be seen laughing at Gehlot’s remarks, cited Rajendra Rathore’s consecutive victories from Churu constituency in 2013 and 2018 Rajasthan assembly polls. In both elections, Rathore, a loyalist of BJP leader and former two-time Rajasthan CM Vasundhara Raje – defeated Congress candidates.

“I went to his (Rathore’s) rally. The magic of the magician is okay (pointing towards Gehlot), but even I did magic (since) he never lost an election till today,” Dhankhar was quoted as saying by ANI.

The VP further said that he is “beyond politics”. He said that Gehlot, Raje and others can “throw light” on why, how and on what basis political decisions are taken.

Dhankhar also joked about taking “help” from Raje once regarding Banerjee in the form of a “magic spell”.

“Vasundhara Raje started in the parliamentary area in 1989. I also got this opportunity. Since then my relations with her have been personal. I even sought help from her after becoming the governor of West Bengal (saying) that my chief minister is Mamata Banerjee. Please tell me some magic spell,” he said.

Dhankhar and Banerjee and the entire ruling camp in Bengal remained at loggerheads with each other during his term as the governor of the eastern state. The CM and several of her ministers often called for the removal of Dhankhar from the position.

Gehlot’s ‘magician’ remark comes at a time when reports suggest he is the frontrunner in the race to become the next Congress president. The Rajasthan CM’s late-night meeting with MLAs on Tuesday created buzz that he may soon be filing nomination papers. He reached Delhi earlier today and told reporters that he will abide by the wishes of Congress if they ask him to file his nomination. Gehlot, however, stressed that he would make one last effort to convince Congress MP and former party president Rahul Gandhi to consider taking up the post again.