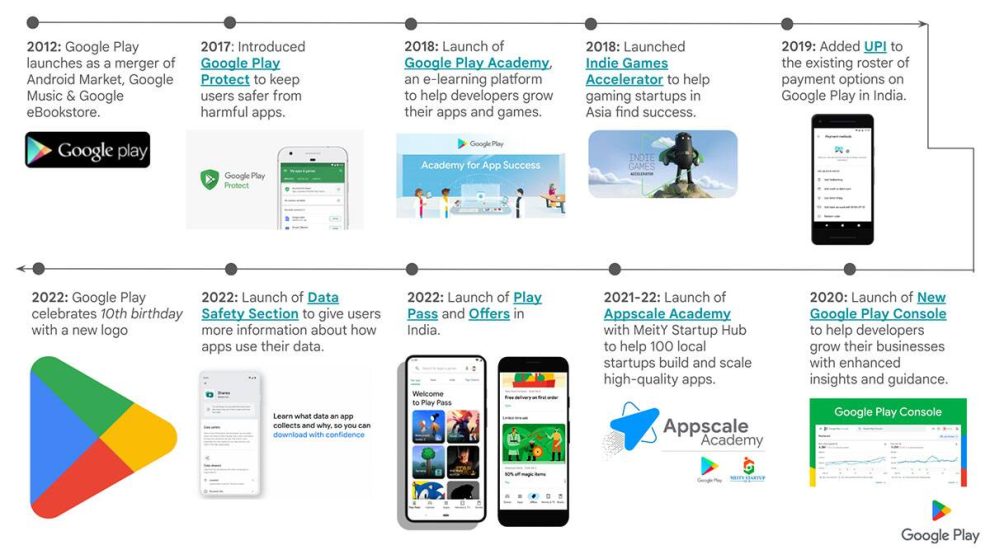 Google Play was launched worldwide in 2012 and is now marking 10 years. In a blog post, Google has revealed that the Play Store has more than 2.5 billion users across 190 countries and over 2 million developers are working on the platform. According to Google, India has emerged as one of the top downloaders of apps and games in the last decade.

In fact, there was a 200 per cent growth in monthly active Google Play users in 2021 compared to 2019. Similarly, there has been an 80 per cent increase in consumer spending on Google Play during the same period, according to Google’s blog.Apps in categories including education, payments, health, entertainment, and gaming have seen massive growth. The tech giant referred to health app HealthifyMe, self-publishing and audiobook portal Pratilipi and multilingual learning app Doubtnut as examples of apps driving this growth.

In recent times, Ludo King became the first Indian game to cross 500 million downloads, with PlaySimpleGames being another example of a thriving local gaming studio. Agritech startup is helping farmers with their work while Evolve has mental health offerings aimed at the LGBTQ+ community. Samurai is an app that aims to provide accessible and affordable speech therapy.

Not only are Indian-made applications succeeding in the domestic market, but local developers are also finding global audiences. Indian apps and games witnessed a 150 per cent increase in time spent by users outside India in 2021, compared to 2019.Google has many problems intended at training and helping Indian developers build successful businesses relevant to.the local market. One of them is the company’s self-learning platform, Play Academy. According to Google, Play Academy has trained over 80,000 developers in India since its launch in 2018. This means that Play Academy has trained more developers in India than in any other country.

The company also has accelerator programs like its India Games Accelerator and Google for Startups Accelerator. The company has also developed an Appscale Academy program in partnership with the Ministry of Electronics and Information Technology startup hub. Over 100 entrepreneurs graduated recently from Appscale Academy, improving their applications’ user interface, user experience, security, user base, engagement rates, and ratings. Many of them went on to receive funding offers from VCs as part of the program.