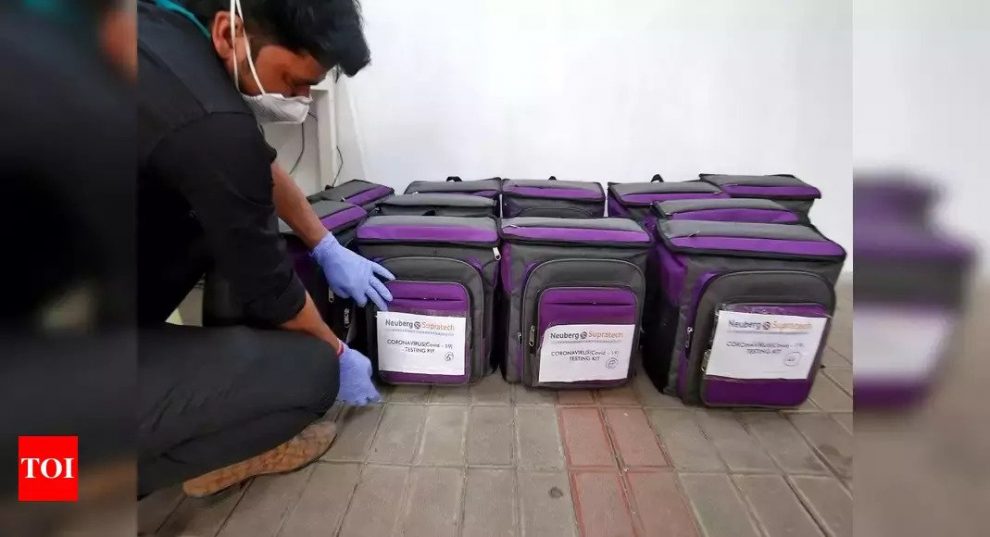 NEW DELHI: Keeping in view the urgent need to check migrant workers who left cities for their homes in the hinterland for Covid-19, the government is modifying its testing strategy to test all symptomatic cases in high risk zones or ‘hotspots’ reporting large number of cases.
The decision was taken by the empowered group, one of 11 formed to consider various aspects of the Covid-19 crisis, that is looking at disease surveillance, testing and availability of hospitals and isolation beds on Wednesday and a notification is likely to be issued on Thursday. “The details of the modifications in the testing protocol are being worked out and we will probably notify it tomorrow,” an official said.
The move comes in the wake of a large number of migrant workers heading out of the cities to various villages and districts across the country with areas where they have returned in high numbers being marked as risk zones. Besides, the recent spread of the infection through the Tablighi Jamaat congregation in Delhi’s Nizamuddin has led to concerns about a potential spurt in transmission of the virus to remote areas as well.
At present, symptomatic individuals who have undertaken international travel in last 14 days, symptomatic contacts of positive Covid-19 cases and symptomatic healthcare workers are tested for Covid-19. Apart from this, on March 21 the government and the Indian Council of Medical Research (ICMR) revised its strategy to include all hospitalised patients of severe acute respiratory infection (SARI) for testing.
“It is important to review the methodology of screening. We are looking at making modifications in the testing protocol so as to ensure that high risk zones are covered under the screening. However, we will have to do it strategically to ensure the healthcare worker in the frontline is not unnecessarily exposed to the risk factor,” the official told TOI.
The government and ICMR has been criticised by a section of experts who are of the view that India is testing too less and lack of diagnosis may pose a challenge for the government to detect community spread in time. However, the Centre and ICMR have so far maintained that unnecessary testing will lead to panic and wastage of resources. Instead, the government has insisted on stringent implementation of lockdown and social distancing measures to break the chain of transmission.
ICMR has also said that there are adequate capacity to ramp up testing at any point if required, even as aggressive testing will not lead to any solution.
According to the official, even the group has not favoured aggressive testing or mass testing. “It is important to take a graded approach,” the official said.
According to Dr R R Gangakhedkar, head of epidemiology and communicable disease at ICMR, India has so far tested 47,951 samples for Covid-19. While there are 126 public labs, it has utilised only 38% of the total capacity. Besides, 51 private labs have also been approved by ICMR till Wednesday.
The group has also identified around 200 Covid-dedicated hospitals across the country for treatment of patients. These hospitals include those under public, private and those under defence, railways, Coal India, Steel Authority of India (SAIL) and other private medical colleges. The idea is to have dedicated facilities separated from usual hospitals to avoid risk of cross-infection.

Trace all Jamaat attendees on war footing: Centre to states
Centre redefines domicile for J&K, extends it to those living in UT for over 15 years