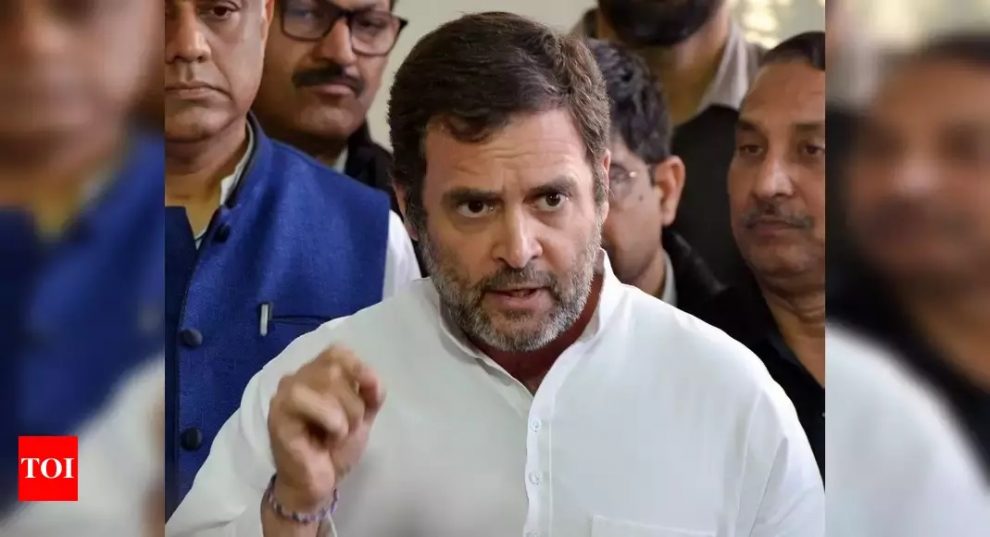 NEW DELHI: Holding the government responsible for the plight of migrant workers who are walking down to their native places in the wake of the Covid-19 lockdown, Congress leader Rahul Gandhi on Saturday demanded that it take concrete steps so that the situation “does not become a major tragedy”.
He also appealed to Congress workers to help such migrants by offering them food and shelter.
“The government is responsible for this terrible condition. It is a big crime to bring citizens to this condition.
“Today, in the hour of crisis, our brothers and sisters should at least get respect and support. The government should take concrete steps as soon as possible so that it does not become a major tragedy,” Gandhi said on Twitter.

He said “hundreds of our starved and thirsty brothers and sisters, along with their families, are forced to walk down towards their villages”.
“If you can, please provide them with food, water, shelter to them during this arduous journey. I particularly appeal for help from Congress workers and leaders. Jai Hind,” Gandhi also tweeted in Hindi.
Congress leader Priyanka Gandhi Vadra said when government can send planes to bring back Indians from abroad, why it cannot provide transport to send the labourers home.
“How can we as a nation just leave thousands of migrant workers to fend for themselves? There are men, women and children who are walking as far as Eastern UP and Bihar,” she said.
“We sent planes to bring citizens from Europe, why aren’t we organising transport to take the poorest and most vulnerable amongst us home,” she tweeted.
She said it is the government’s moral duty to help fellow citizens in this time of crisis.
“For God’s sake, Modi ji and Amit Shah ji please use the power you have been given to save their lives,” Priyanka Gandhi said in an appeal to the PM and Home minister.
“Do not give this treatment to our own Indians. We should be ashamed that we have left them in this state. These are our own. Labour is the backbone of the country. Please help them,” she said.
She lauded the efforts of UP Congress in helping the people in this hour of crisis.
Former finance minister P Chidambaram termed it “another distressing example of the government’s unpreparedness”.
The Congress has been critical of the government’s handling of the situation, accusing it of not taking adequate steps to mitigate the plight of migrant labour force.
Congress chief Sonia Gandhi had also written to the prime minister, urging him to take immediate steps to help the poor migrant labour force, who have been forced to return home on foot in the absence of public transport amid the country-wide lockdown due to coronavirus.
Congress chief spokesperson Randeep Surjewala also tweeted: “Respected Prime Minister, It is most important to stop this human tragedy. Two pleas: Full ration, half pay. Just food and medicine, Every person should reach home safely.”
The Union home ministry on Saturday changed the rules for assistance under the State Disaster Relief Fund (SDRF), facilitating availability of money for food and temporary accommodation for migrant workers during the 21-day lockdown.
In a communication to all chief secretaries, the ministry also said medical care and clothing can be provided to migrant workers during the period.