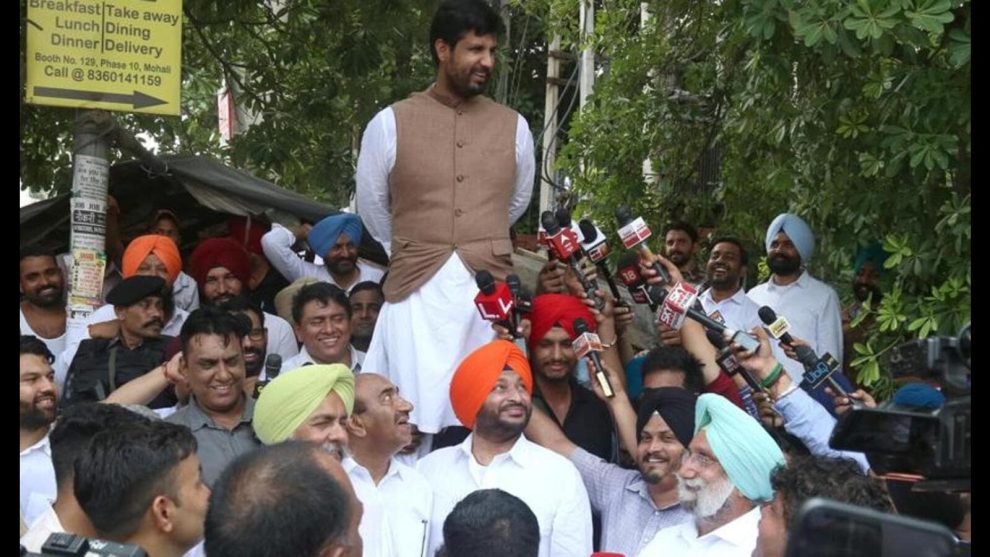 Chandigarh News : Party leaders, including Punjab Congress president Amarinder Singh Raja Warring, accused the AAP government of indulging in “vendetta and witch-hunt in Punjab” to divert attention from the heat it’s facing from probe agencies in Delhi The Punjab Congress on Monday presented its leadership before the vigilance bureau (VB) saying it could detain any of them as it was “fed up” of allegations of corruption against its leaders by the Bhagwant Mann government.

The Punjab Congress on Monday presented its leadership before the vigilance bureau (VB) saying it could detain any of them as it was “fed up” of allegations of corruption against its leaders by the Bhagwant Mann government.

Party leaders, including Punjab Congress president Amarinder Singh Raja Warring, accused the AAP government of indulging in “vendetta and witch-hunt in Punjab” to divert attention from the heat it’s facing from probe agencies in Delhi.

“They (AAP) are crying persecution and victimhood in Delhi but in Punjab, they are resorting to a worse type of vendetta against their political opponents,” Warring said.

The Congress delegation was not allowed to enter the VB headquarters in Mohali as the heavy barricading and police deployment was done to thwart their entry.

Former food and supplies minister Bharat Bhushan Ashu also addressed the Congress leaders outside VB office and claimed that no case has been registered against him so far in any case. He blamed media for spreading false information about registration of the case. However, later in the day, the VB arrested Ashu for his alleged involvement in a scam related to allotment of foodgrain transportation tenders on fake registration number of vehicles. The vigilance officials suspect it to be a ₹2,000 crore scam.

“The Punjab Congress wants to make it categorically clear to everyone concerned, the political leadership and the executive alike, that the party will not take it lying down anymore”, it said, adding, “we will use all legal and legitimate channels to defend ourselves and also ensure that those involved and indulging in witch hunt and intimidation of our workers and leaders are held to account at the right time”.

Accusing the government and the vigilance bureau of inflating and exaggerating the figures, which it said “in any case are baseless, false and fabricated”, the memorandum further stated, “the way figures are magnified, dramatised and sensationalised, it is clear that there is deliberate design behind it to create a false perception among the public against the party leaders”.

“The vigilance is being used by the government to cover up its failures in fulfilling the promises it had made as also to divert the attention from the corruption scandals that are tumbling down their cupboard in Delhi”, the memorandum added.

Bajwa, 2 other senior leaders give protest a miss

All three leaders reached the state Congress office in Chandigarh in Bajwa’s vehicle where the party leaders were asked to assemble before heading towards the vigilance bureau office in Mohali. The vehicle was stopped at the gate and not allowed inside. “Bajwa and others got down and went into the party office. When the LoP asked the office staff about his vehicle not being allowed into the premises, he was told that the gate was closed as it frequently develops a defect. Bajwa was told that security personnel will be told to open the gate to let his vehicle inside, but he was not satisfied,” said a senior leader on condition of anonymity.

Bajwa, along with Soni and Singh, left the party office. Within minutes, Punjab Congress president Amarinder Singh Raja Warring, who was to lead the party protest, came out and took the police personnel manning the gate to task. “He (Bajwa) is our senior leader. They cannot stop him from entering the premises. We will complain against these security personnel,” Warring told reporters. The Congress leaders later went to the vigilance bureau office to stage the protest, but the trio did not join them. Another party leader said that this situation could have been easily avoided as this was not the first time the vehicles of senior leaders were stopped at the gate in recent months. Bajwa did not respond to calls.

Nothing Phone 1 Android 13 Update to Roll Out in First Half of 2023, Says Company
Retail sale of bio-diesel likely to be permitted in UP