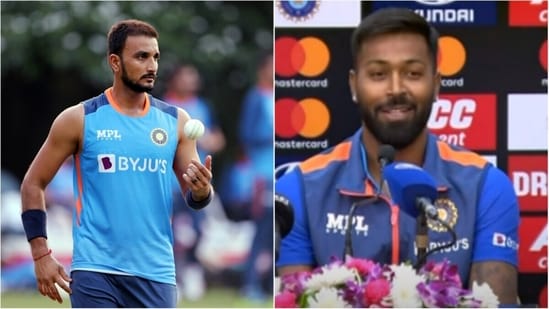 Hardik Pandya had a tongue-in-cheek response to a reporter’s question on Harshal Patel’s 18th over of the Australian run-chase after India’s five-wicket defeat in the first T20I.

India appeared to be clueless in the first T20I against Australia even when visitors needed 55 runs off the final 4 overs to win, with five wickets in hand. As per a sarcastic Hardik Pandya, they literally were. After Australia pulled off their highest successful run chase against India in a T20I in the series opener in Mohali on Tuesday, Hardik Pandya, India’s star with the bat, responded in an unexpected manner to a journalist’s question on the turning point of the match. Hardik, who smashed an unbeaten 71 off 30 balls to fire India to an imposing 208/6 – their highest score against Australia – said he doesn’t know where the match slipped away from India but when the journalist said it may be the 18th over of Harshal Patel in which 22 runs came, Hardik said one shouldn’t ‘pinpoint’.

“Aap batao, mujhe nahi pata, humko pata hota toh wahi nahi rok dete na. (You tell me, I don’t know. If we knew, we would have stopped them in the field)” Hardik said when the journalist asked him about the “turning” point.

“Dekho sir, pinpoint nahi kar sakte. Unke time pe bhi ek over mein 24-25 run aye, usse kuch farak nahi padta. Bilateral series hai, aur do matches hai usmein koshish karenge kuch accha karne ki. (See, we can’t pinpoint on any over, they also conceded more than 20 runs in an over. There are still two matches in the series, so we will make a come back),” he added when Harshal Patel’s name came up.

The Aussies sped off to a great start with Aaron Finch (22) and Green putting on 39 runs off 21 balls in the 209-run chase. Axar Patel bowled Finch even as Green launched a counter against Yuzvendra Chahal (1-42), taking 19 runs off the seventh over. He hit eight fours and four sixes during his 30-ball stay.

Green enjoyed a life at 42 not out when Patel dropped him at midwicket off Pandya. At the other end, Steve Smith (35) too was dropped on 19 not out by Lokesh Rahul.

The duo put on 70 off 40 balls for the second wicket to put Australia in the drivers’ seat. Green hit eight fours and four sixes, but fell immediately after the drinks’ break. Kohli held a high catch to dismiss Green off Patel and swung momentum the other way.

Wade and Tim David (18) then combined for 62 runs off only 30 balls to thwart India’s best efforts. Requiring 64 off 35, Wade struck six fours and two sixes as Australia won with four balls to spare.

“There was no dew, you need to give credit to them. Maybe we could’ve executed our plans better, our” deliveries could have been but they played some good shots,” Hardik said.

Light to moderate rainfall expected in Delhi today: IMD
Elon Musk to Be Questioned Under Oath in Twitter Lawsuit on September 26: All Details