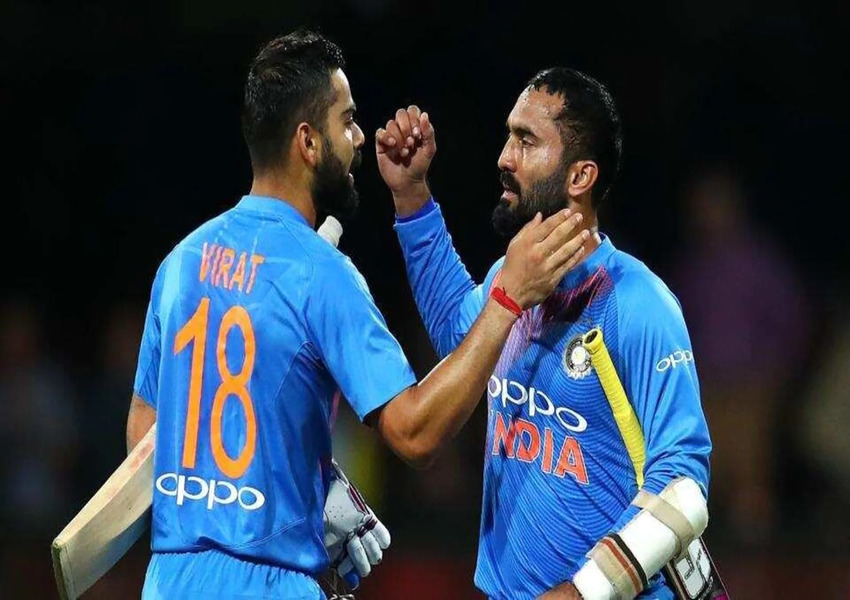 Irrespective of the result in the Edgbaston Test earlier this summer and the overall result in the Pataudi Trophy series of 2021/22 which ended in a 2-2 draw, the part which which remain forever inscribed was India’s show in those four Tests in England in 2021 where the visitors had scripted an astounding 2-1 lead with wins at Lord’s and the Oval. And what those wins particularly epitomised was the Indian team under the captaincy of Virat Kohli – to remain aggressive, to remain in front foot and to believe no matter the circumstance. Recalling one of those wins, the one at Lord’s, Dinesh Karthik shared a very “interesting” anecdote on Kohli’s captaincy.

Karthik wasn’t part of the team, but was on the commentary panel for that part of the series and hence had watched the Indian side from close. Speaking to Cricbuzz on ‘Summer Stalemate’ a year later on that Test match at Lord’s, Karthik revealed Kohli’s mindset heading into the final innings of the match where England had 272 to chase on a rather easy conditions. But all it took India was 51.5 overs to fold England as India scripted a memorable 151-run win in the 2nd Test match of the series.

“Virat Kohli said a very interesting line. I guess it was post match. He said, ‘I wanted the English batsman to feel what is like to be in hell for the time they were at the crease.’ He literally walked the walk and talked the talk in that 50 overs stint that India bowled because it was really a pressure-filled time for England,” Karthik recalled.

“The wicket had eased out a little more than what it was in the first innings. If at all they should have been batting more comfortably. But this is what pressure does to you. But it was the mental pressure that India put. And the kind of hole that England were digging themselves into and the kind of field they had set for the England tail enders, all these played a part.”

The veteran batter further talked about how inspirational it is to be part of a huddle during Kohli’s captaincy and revealed that ahead of the final innings at Lord’s he had only one goal for India – to get all those 10 wickets. Karthik further hailed Kohli as one of the best ever fast-bowler’s captain world cricket has seen in ages.

“Kohli was very animated but he says things that really sparks you at times in the huddle and that huddle should be very special to be part of. I have been part of huddles where he has egged on players to do something special. But I think he was all charged and was gunning for those 10 wickets and he got that in 50 overs. It easily must have been one of his best Test matches,” he said.

“And he is one of India’s best captains because of what he has been able to get abroad and the number of wickets fast bowlers picked in India which is not something we are used to seeing. You can definitely say that he has been a better fast bowler’s captain than anyone else for a long long time. You don’t need much to do when you have Ashwin and Jadeja in the team but he has made India a very potent bowling attack when it comes to fast bowling.”