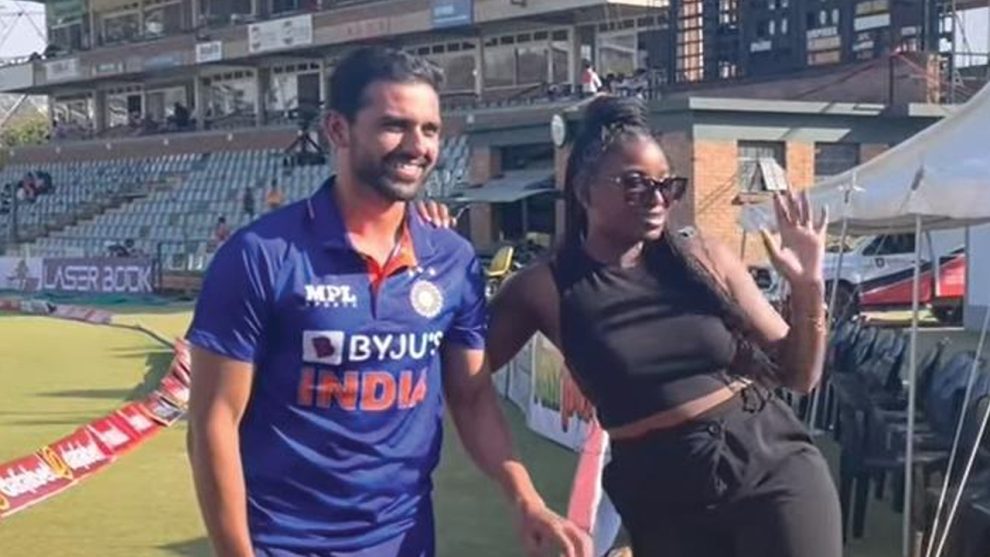 Deepak Chahar has made a superb comeback to international cricket after a six-month-long injury layoff with a Player of the Match performance in the first ODI against Zimbabwe in Harare. The right-arm pacer picked up three for 27 with all of his wickets coming inside the powerplay that broke the backbone of Zimbabwe’s top-order. Chahar’s performance earned him instant fan-following in Harare. While the Indian fans in the stand showed their full support for the Rajasthan cricketer, Chahar would be more pleased with the kind of impression he created on the locals.

The local journalists, groundstaff, and security personnel, all wanted have a glimpse of Chahar up close and personal. A Zimbabwe cricketer’s family members took turns to click photos with the India pacer after the match. In a video uploaded by journalist Vimal Kumar, the female fans were seen asking for Chahar’s permission before taking a selfie. “Can I tough you?” one of them asked and put her arms on Chahar’s shoulder only when the Indian pacer gave his approval.We are very happy, he was so humble and cute,” another one said when asked about their interaction with Chahar.

Chahar, for his part, was very pleased to get the kind of support after such a long time. “In ODI and Test cricket, you really need the crowd to motivate you at times when things are tough. Really happy to see such large gatherings for matches, we missed them a lot during Covid,” he said.Asked if he feels his T20 World Cup doors could open up, Chahar said: “I can’t say if I will be selected or not as that’s not in my hands but skill wise I have worked very hard.”I think I have picked up from where I had left and today also barring first two overs, I bowled well. I bowled seven overs at one go which is an indicator that my fitness levels are okay,” Chahar told reporters after the game.