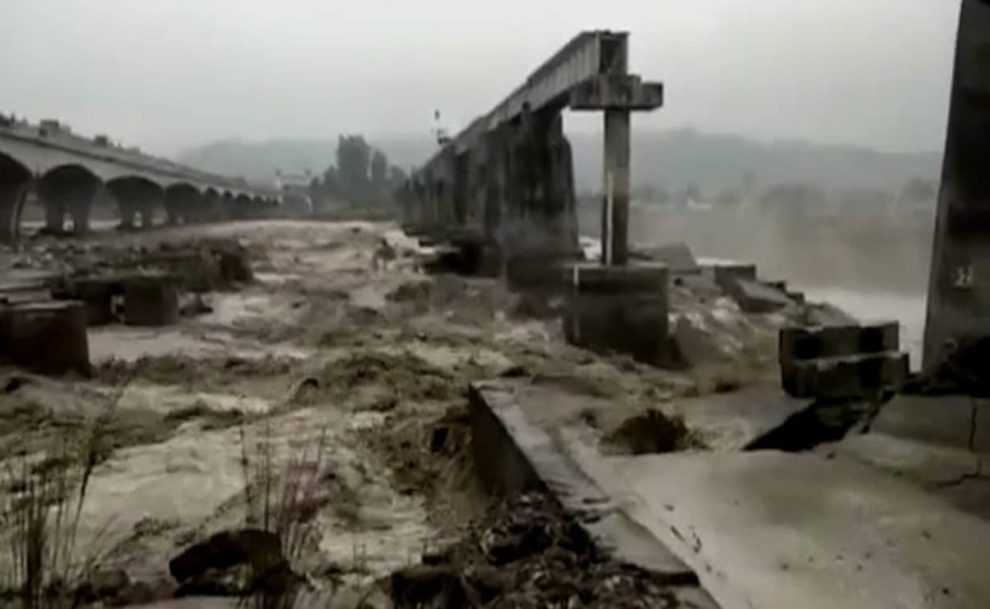 Heavy downpour and landslides affected routine lives of the people in Himalayan state as National Highway 5 was closed in Solan district and 22 people were stuck after an incident of flash flood was reported from Hamirpur district. Schools in some districts were ordered to be closed as the IMD predicted heavy rainfall to continue for next 2-3 hours in some parts of the state.

As per the Indian Meteorological Department, the heavy rainfall is likely to continue in several parts of the state for the next two to three hours. Light to moderate rainfall with thunderstorm likely to continue in the districts of Chamba, Kangra, Mandi, Hamirpur, Bilaspur, Una, Shimla, Solan, Sirmaur, Kullu, Kinnaur, and Lahaul-spiti and adjoining areas with low visibility conditions,” said the IMD in a statement.

“Heavy rainfall is likely in the Kangra, Chamba, Bilaspur, Sirmaur and Mandi at isolated places during the next 2-3 hours,” said the MeT department.

Earlier this morning, flash floods occurred in the Mandi district of the state resulting in inundated houses and shops, trapping residents and damaging vehicles parked on the road, reported the news agency citing officials.

The incident affected places at Balh, Sadar, Thunag, Mandi and Lamathach in the district, a bulletin by the Himachal Pradesh-State Emergency Response Support System stated.

“ Many areas of Mandi received rain overnight; we started receiving calls of roads getting blocked & other related concerns at 1:30am. Many individual incidents were resolved. Police on the job, NDRF was contacted at around 2:30am; their mobilisation done,” Mandi Deputy Commissioner (DC)Arindam Chaudhary told ANI. Segli region in Mandi district also witnessed landslides ensuing heavy rain, Chaudhary said.Owing to torrential downpour in the state, schools in Mandi and Kullu districts of Himachal Pradesh were ordered to shut.

In view of incessant rains in Mandi for the past two days and the weather forecast of heavy rainfall in the next 24 hours, it has been decided that all the government and private educational institutions except colleges and ITI in Mandi district shall remain closed on August 20, Chaudhary said in an order issued on Friday evening.Schools in Kullu district were also directed to be closed in an order by Kullu DC Ashutosh Garg. All schools including the Anganwadi Centres ordered to be closed throughout the Kullu district in view of the incessant rains, the Deputy Commissioner said.

National Highway 5 at Kandaghat in Solan district was closed due to a landslide, reported the news agency.

An incident of flash flood was reported in Hamirpur district where 18 out of 22 people affected have been rescued, said the State Emergency Operation Centre, adding that no damage to life and property have been reported so far.