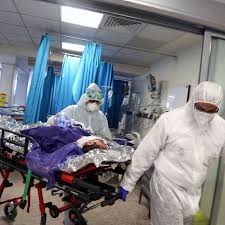 AHMEDABAD: In what is being termed as one of the country’s rare Covid-19 recovery stories, a 27-year-old HIV positive patient from Kumarkhan village of Viramgam taluka in Ahmedabad has won the battle against the highly contagious virus.
What is even more startling is that the patient had a blood haemoglobin of 2.3% with a low iron binding capacity and was severely anaemic. He was admitted to the civil hospital in Asarwa in Ahmedabad on April 15 and was discharged on Monday.
“The patient was a challenge for our medical team at the civil hospital. He was given three blood transfusions during the 20-day stay at the hospital. He was regular in taking his antiretroviral therapy and drug during hospitalisation even before he was infected with Covid-19. But in the end it was the medical teams’ resolve and patient’s immunity and his will to survive that won the battle,” said Arun Mahesh Babu, district development officer (DDO), Ahmedabad.
Sources in the civil hospital claim that the patient’s blood reports were not encouraging and there were bleak chances of his survival. However, the patient fought on.
Leading infectious diseases specialist Dr Atul Patel said that HIV patients could beat Covid-19. “In today’s medical scenario, an HIV positive person who is on anti-HIV medication is not considered immunocompromised anymore”. He said HIV positive persons, if given the right treatment and support, could beat any illness as as normal human beings.
A detailed file of the patient is being prepared by the hospital as it is one of the rare cases in the country and may throw light on future research. A short video of his return to the village was released by the Ahmedabad DDO office. The patient’s family, panchayat members and village elders held a short welcome ceremony for him.

Government ensured nobody goes hungry in this crisis: BJP