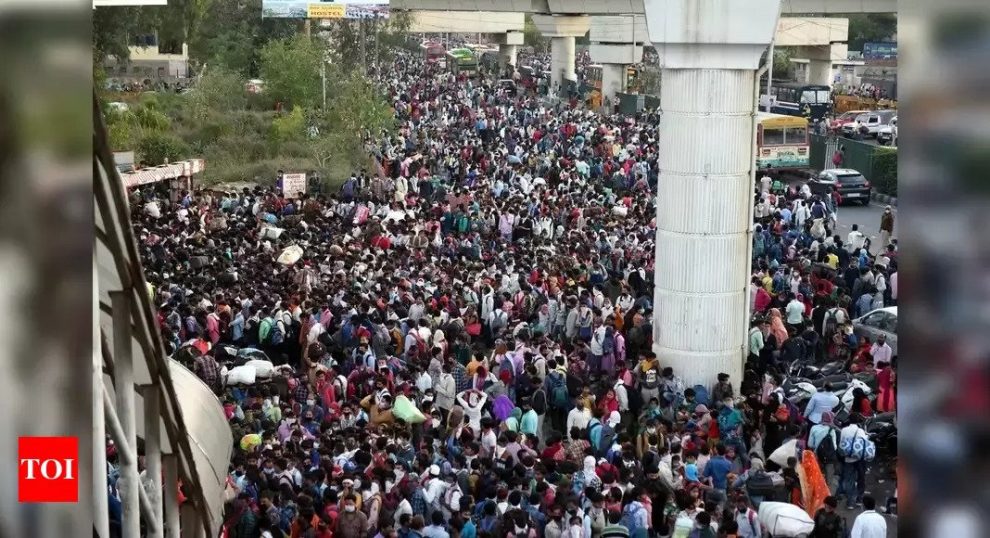 NEW DELHI: Though a nationwide lockdown is in force since March 25 to check the spread of coronavirus COVID-19, Anand Vihar bus terminal in Delhi bordering Uttar Pradesh has been overcrowded with migrant labourers for the past couple of days, thus, defeating the whole purpose of “social distancing”.
The migrant labourers from Delhi are mostly from Uttar Pradesh and Bihar. They are generally engaged as construction workers, rickshaw pullers, waiters and similar unskilled or semi-skilled jobs and stay in rented accommodation.
Out of these, around 4 lakh construction workers are registered with the Delhi government’s Construction Workers Welfare Board (CWWB). These migrants are believed to be hardcore supporters of Delhi chief minister Arvind Kejriwal-led Aam Aadmi Party (AAP) and had voted for him in the recently-held assembly elections.
They have been badly hit by the outbreak of coronavirus disease – COVID-19. These migrant labourers, who survive on daily earnings, received the first jolt on March 22 during ‘Janta Curfew’ declared by Prime Minister Narendra Modi in his televised address to the nation.
In order to mitigate their woes, Delhi chief minister Arvind Kejriwal appealed to all landlords to take rents from their tenants in the next one or two months if the latter could not afford to pay them immediately during this period of lockdown. He tweeted in Hindi: “We cannot leave any poor without food and support. This is a joint effort.”

Three days later (on March 25), the PM, in his second televised address to the nation within a week, declared a nationwide 21-day lockdown from midnight till April 14.
Failing to meet both ends meet due to the lockdown, a few migrant labourers left for their homes in Uttar Pradesh, Bihar and Rajasthan.
The news was flashed by some TV news channels and it became viral on social media.
Subsequently, a rumour started doing the rounds that the lockdown would last for three months till June.
Financial hardship started them in their face as they were not in a position to pay the house rent.
On the other hand, the landlords also thought that the tenants would consume electricity and water but would not pay their rents.
Faced with these apprehensions, the tenants allegedly stopped or threatened to stop the water and electricity supplies to the tenants. The UP government, however, alleged that the Arvind Kejriwal government disconnected the water and electricity supply to the migrant workers.
With train and bus services having already stopped, going to their homes on foot was the only option left for these migrant labourers. Thousands of labourers, including women and children, set out in groups for their homes.
Instead of taking steps to hold the labourers back, the Arvind Kejriwal government facilitated their exodus by providing buses to them to reach the UP border.
Another rumour was also spread that Uttar Pradesh government’s buses were waiting for them to take them to their respective destinations.
Delhi deputy chief minister Manish Sisodia said around 100 buses of the Delhi government and 200 of the Uttar Pradesh government were ferrying people trying to leave Delhi by foot. “Despite that I appeal to all to obey the lockdown. This is the only solution to mitigate the impact of the coronavirus. There is a complete risk of contracting the disease on venturing out,” he tweeted on March 28.

Manish Sisodia also sought to defend his government by saying that the exodus was taking place from different states and not from Delhi. In another tweet he said, “A rumour has spread in several states (asking the migrant labourers) to cross the (Delhi) border where arrangements are in place for buses to go to different states. That is why people are travelling from Haryana to Delhi, Delhi to UP and back.”
However, instead of taking the labourers to their destinations, the Delhi Transport Corporation (DTC) buses dropped them at the Anand Vihar bus terminal.
Moreover, there was no such arrangement at the Anand Vihar bus terminal. There were no buses to take them to their hometowns.
Thereafter, the situation became chaotic.
Failing to find any buses and with no scope to return – as they had no homes – a large number of migrant labourers set out on foot. Simultaneously, a large number of migrant labourers kept pouring in at Anand Vihar and other points on the UP-Delhi border.
The situation became panicky.
The Uttar Pradesh government issued a statement on March 28 accusing the Delhi government of indulging in “cheap politics at a time of crisis and playing with the lives of people of this country”.
It said the Delhi government disconnected water and electricity connections of people. “During lockdown, people were not even provided food and milk in Delhi,” it said and alleged that DTC buses dropped off people at the Delhi border in the name of help.
“Announcements were made in Delhi and rumours were spread that there are buses at UP border waiting to drop people to their destinations,” said the statement.
The statement further said UP chief minister Yogi Adityanath had stayed awake all night to manage and streamline transportation for people from UP and Bihar stuck at the border. “At night, transportation officials, drivers and conductors were called from home,” it said, adding that 1,000 buses were arranged at night.
“The CM stayed awake all night and arranged 1,000 buses for people to reach their destinations from Noida, Ghaziabad, Bulandhshahr, Aligarh and Hapur,” said the statement.
The UP government made arrangements to bring these people from the borders – Anand Vihar and Ghaziabad – and Aligarh, Hapur and Bulandshahr, where some of them had already reached.
Manish Sisodia issued a strong rebuttal to the allegations levelled by the UP government.
In a tweet, he said, “I am pained that in the midst of the coronavirus pandemic, the BJP leaders have stopped down to low-level politics. The Yogi Adityanath government has alleged that the people have started leaving Delhi because Arvind Kejriwal has disconnected water and electricity supply. The time is to seriously unite and save the nation and not indulge in low-level politics.”

Meanwhile, looking at the seriousness of the matter, the Centre issued an advisory to all states and Union territories (UTs) to make adequate arrangements for migrant workers, students and others from outside their states to facilitate “Social Distancing” for COVID-19.
The home ministry on March 27 wrote to them to take immediate steps to provide adequate support, including food and shelter, to migrant agricultural labourers, industrial workers and other unorganised sector workers during the 21-day nationwide COVID-19 lockdown.
The advisory also suggested the states and UTs to explore measures by involving various agencies, including NGOs, to provide food and shelter with basic amenities like clean drinking water, sanitation and the likes.
As the migrant labourers have been left high and dry, it has defeated the basic purpose of the lockdown. The massive crowds have posed a grave risk of spreading COVID-19. They may have inadvertently worked as catalysts for the spread of the virus which is believed to have originated in the Wuhan province of China.
In the latest development, the Centre has asked the respective state governments to quarantine all the migrant labourers as a precautionary measure after they reach their destination.