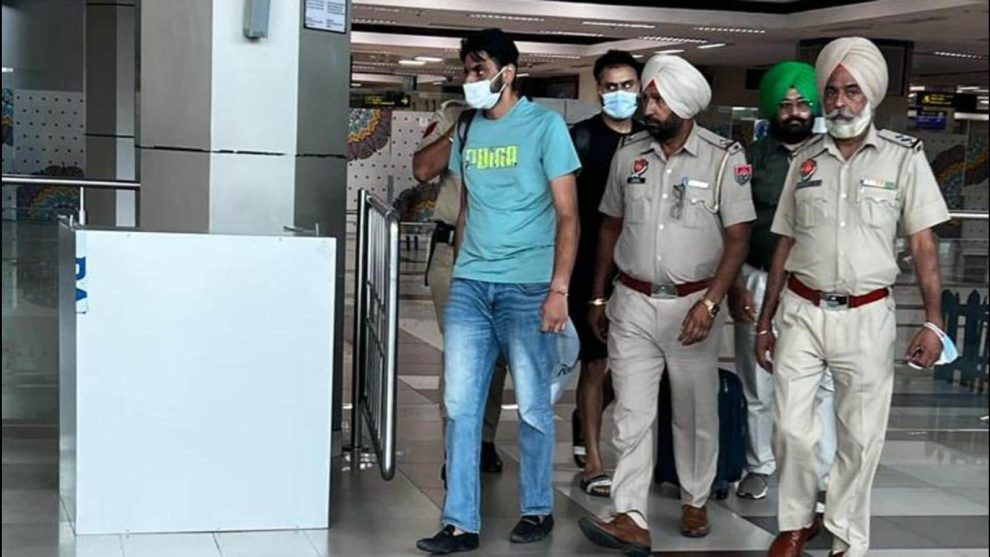 Chandigarh News : Closed-circuit television (CCTV) cameras installed near sub inspector Dilbagh Singh’s residence in C-Block area had purportedly shown two motorcycle-borne men, with their faces covered, planting the explosive under the car. The accused, Harpal Singh and Fatehdeep Singh, who were arrested at the Delhi airport, being brought to Amritsar on Wednesday.

A day after an improvised explosive device (IED) was recovered from under a sports utility vehicle (SUV) belonging to a sub-inspector in Ranjit Avenue area of Amritsar, police on Wednesday arrested two suspects from the Indira Gandhi International (IGI) Airport in New Delhi.

The accused have been identified as Harpal Singh, a constable in the Reserve Batalion of Punjab Police who is deployed with a famous advocate in Amritsar, and Fatehdeep Singh of Sabran village in Tarn Taran district.

Additional director general of police (ADGP, internal security), RN Dhoke confirmed the arrest of the accused. He, however, didn’t divulge more details. “Both the accused are being questioned,” he added.

Police sources said both the accused were brought back to Amritsar in a flight. They were nabbed with the help of the Delhi police.

Sources said Fatehdeep has a history of Canada visit. His father Tarsem Singh was a road contractor. Similarly, Harpal Singh’s family owns around seven acres in Sabran village. Sources said both accused have no criminal antecedents.

It is not yet clear where the accused were planning to go from Delhi airport.

Earlier on Wednesday morning, the ADGP had said the IED weighed about 2.7kg and contained RDX.

Dhoke said they were probing the terror angle into the incident and a mobile phone has also been recovered from the spot.

He said senior police officials from Chandigarh were monitoring the probe, which is being headed by inspector general of police (IGP), border range, Mohnish Chawla.

Replying to a question that the SI had allegedly been getting threats, the ADGP said, “Our investigation in this regard is on.”

The IED was reportedly planted under the car at 11.30pm on Monday. Dilbagh’s driver had noticed the explosive while cleaning the vehicle.