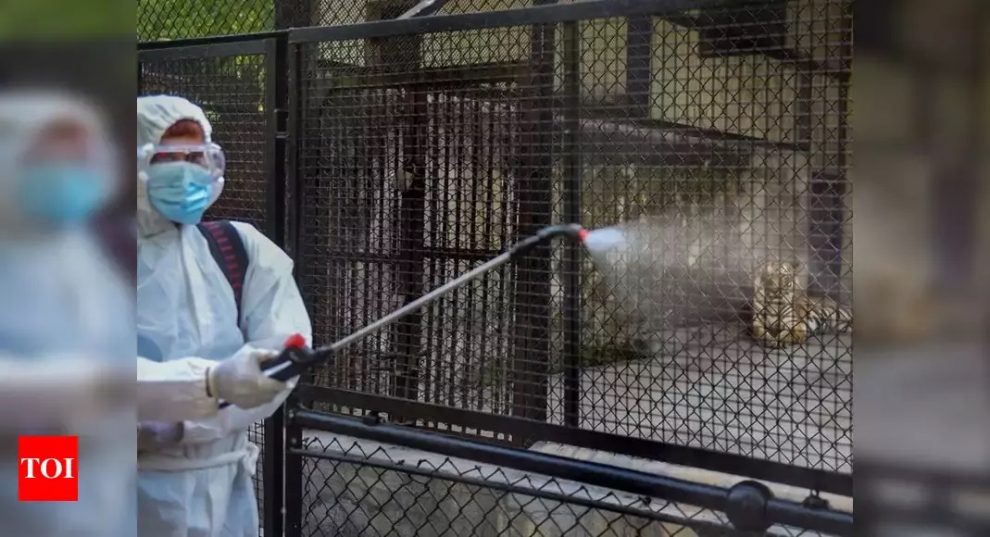 NEW DELHI: In the wake of a report from the US where a tiger at Bronx Zoo in New York tested Covid-19 positive, India on Monday kept its zoos, national parks, wildlife sanctuaries and tiger reserves on “highest“ alert, asking authorities to watch the big cats on 24×7 basis for any abnormal behaviour and take “immediate preventive measures to stop transmission and spread of the virus from human to animals and vice versa”.
With 2,967 tigers, India is currently home to 75% of the global tiger population.
The Bronx Zoo incident is a first known case in the world where a human infected an animal with Covid-19, sending an alarm bell across the globe on whether one should also be extremely careful about being in contact with pets such as cats and dogs. There is, however, no evidence to suggests that the pets are at risk.
Confirming the instance of a tiger being infected with Covid-19, the United States Department of Agriculture’s (USDA) on Sunday advised that anyone sick with Covid-19 should restrict contact with animals, out of an abundance of caution, including pets, during their illness, just as they would with other people.
Although there have not been reports of pets becoming sick with Covid-19, the USDA said it was “still recommended that people sick with Covid-19 limit contact with animals until more information is known about the virus.”
Taking cue from the US example and the USDA’s detailed note on it, India’s environment and forests ministry on Monday wrote to chief wildlife warden of all states/UTs, asking them to “reduce the human wildlife interface and restrict the movement of people to national parks, sanctuaries and tiger reserves”.
The ministry, as precautionary measures, also advised wildlife/zoo authorities not to allow keepers, handlers and veterinary officials in the vicinity of animal enclosures “without safety gear preferably Personal Protective Equipment (PPE)” and “isolate and quarantine” sick animals.
“Mammals like carnivores especially cat, ferret and primates to be carefully monitored and fortnightly samples of suspect cases to be sent to the designated animal health institutes to initiate Covid-19 testing while following all bio-containment and safety measures required to handle this high risk pathogens as per national guidelines,” said S P Yadav, member secretary, Central Zoo Authority (CZA), in his note to all states and UTs.
The government also identified three animal health institutes of the Indian Council of Agricultural Research (ICAR) where COVID-19 testing would be initiated. These institutes are: National Institute of High Security Animal Disease (NIHSAD), Bhopal (MP); National Research Centre on Equines (NRCE), Hisar (Haryana) and Centre for Animal Disease Research and Diagnostic (CADRAD, IVRI, Izatnagar, Bareilly (UP).
Referring to the US tiger case and outbreak of Covid-19 in India, joint director R Gopinath of the ministry in his letter to states/UTs said it was felt that there were possibilities of spread of the virus amongst animals in national parks, sanctuaries and tiger reserves, and also transmission of the virus from humans to animals.
Referring to the Bronx Zoo incident, the National Tiger Conservation Authority (NTCA), in its separate advisories, asked all tiger reserves states to gear up all frontline staff and veterinary officials to detect the disease and prevent any spread in tigers in wild.
“Tigers may be observed for symptoms consistent with Covid-19 such as respiratory signs of nasal discharge, coughing and laboured breathing through direct observation to the extent possible besides through camera trap images for visible symptoms,” said Vaibhav C Mathur, assistant inspector general of forests, NTCA, in his note to states.
He said, “It should be ensured that personnel handling tigers in human-tiger negative interactions and translocation operations be ascertained to be Corona virus negative….As Coronaviruses are known to affect gastrointestinal system in felines, requisite correlation may be made for characterizing the virus type in consultation with the State Veterinary Department.”
The USDA, in its statement on the Bronx Zoo case, said that the samples from this tiger were taken and tested after several lions and tigers at the zoo showed symptoms of respiratory illness.
It said, “Public health officials believe these large cats became sick after being exposed to a zoo employee who was actively shedding virus.”