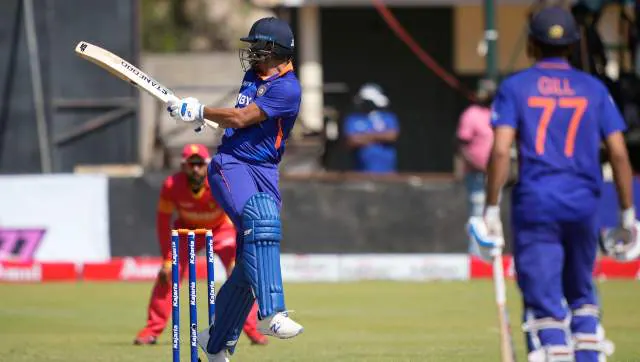 Team India scripted a dominating win against Zimbabwe in the opening match of the series with Shikhar Dhawan and Shubman Gill completing the chase of 190 in just 30.5 overs to script a 10-wicket win after Deepak Chahar’s exploits with the new ball. Team India will aim to carry the momentum in the second game of the series as well and wrap up the contest in Harare. India will have nothing to worry about heading into the match although captain KL Rahul and Deepak Hooda might want some batting time before they leave for the UAE for Asia Cup. Zimbabwe, on the other hand, have a lot to figure out if they want to win the second ODI and force a decider in the series.

An utterly silly run out to end a poor innings from Zimbabwe. Burl is the man on strike and he wants to take two. His partner doesn’t look keen on it at all and there never really was more than a run in that shot. The batters are standing face to face in the middle of the pitch as Prasidh takes the bails off. All very farcical in the end and India need 162 to seal a series win.

Good awareness from KL Rahul. Lofted shot from Burl that is just out of reach for the Indian captain. But he picks up the ball and fires a throw at the keeper’s end to effect the run out.Evans goes for a late cut off Axar but chops on and Zimbabwe are down to their last two wickets. Ryan Burl, meanwhile, has raced to 33 off 44 balls.

Jongwe hits a four off the second ball of the 33rd over and then loses his stumps off the very next one. Thakur bowled the same delivery and Jongwe seemed to backing away to go for the same lofted cover drive. Only this time, the batter missed and the ball crashed on to the stumps.The run rate has gone below four as the Indians keep the pressure on the hosts. Zimbabwe have hardly ever managed to take off here.

Williams slog sweeps this length ball from Deepak Hooda and misses out on his half century by eight runs. He sends it straight down the throat of Shikhar Dhawan at deep backward square leg.

The partnership between Williams and Raza ended with the latter falling to a well-judged catch by Shubman Gill. That stand was worth 41 runs which came off 50 balls. They provided a semblance of a resistance and it looks like Zimbabwe might just end up with a lower total than what they managed in the first ODI.