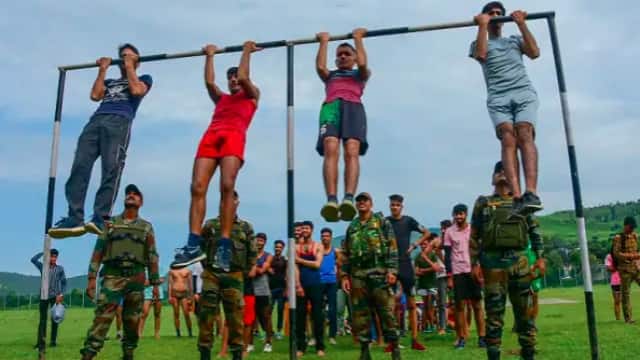 During the investigation in Agniveer Army Recruitment, a case of discrepancy in the date of birth and Aadhar card of about 124 youth has come to light.After the investigation by the army officials, all these youths were excluded from the recruitment process.

The youth of Saharanpur and Bulandshahr districts joined the Agniveer Army recruitment on Sunday in the Agniveer Army Recruitment held at Chaudhary Charan Singh Sports Stadium.About eight thousand youths ran from three tehsils of both the districts.Thousands of youths from Saharanpur’s Tehsil Behat, Nakud and Bulandshahr’s Tehsil Dibai had reached the city on Saturday night itself.After dinner, all the youth lined up for the recruitment process.Late in the night all the youth were taken inside the Numaish ground.

According to Recruit Colonel Somesh Jaswal, the date of birth and Aadhar card of about 124 youths have been found wrong in the investigation.The army threw all these youths out of the field.After this the remaining youth were sent to the sports stadium to run.The race started around 6 in the morning.During this, about eight thousand youths participated in the race of 1600 meters.Before the race, the youth with low height were thrown out of the field.The youth who passed the race were sent to Numaish ground for physical efficiency test.