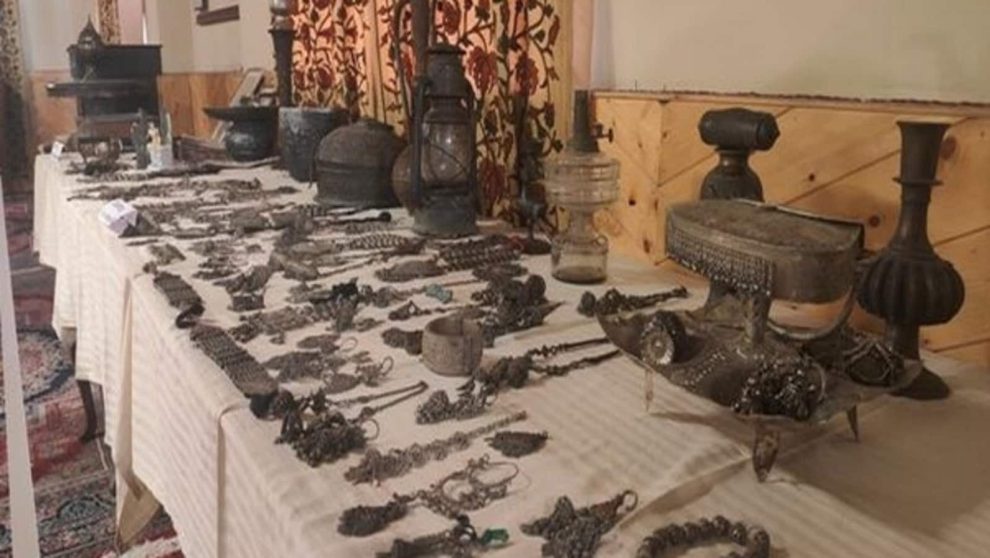 At the Amar Singh Club in Srinagar, a seven-day exhibition centred on the rare manuscripts of the renowned Persian author, poet, and scholar Khawaja Muhammad Amin Darab from the 20th century came to an end on November 20.

A seven-day exhibition based on the rare manuscripts of the famous 20th-century Persian writer, poet and researcher Khawaja Muhammad Amin Darab and rare samples of Kashmiri culture concluded today at Amar Singh Club, Srinagar. This exhibition was organized jointly by Infotech Kashmir and HELP Foundation. ( Artists pay tribute to Ghulam Muhammad Kumhar, last clay tile maker in Kashmir )
About 73 rare manuscripts of Khawaja Muhammad Amin Darab were exhibited in the exhibition. They also include 11 books. The exhibit includes a chronogram of Neil Armstrong’s moon landing, a congratulatory message from Srinagar businessmen to Dogra Maharaja Hari Singh on his accession to the throne in 1923, and several beliefs of prominent scholars, including Muslim scholars and jurisprudents on death. Maulana Anwar Shah Kashmiri was also involved.
Salim Baig, convener of Intake Kashmir said that this workshop is also important because the use of Persian, which was once the official language, is now decreasing. He said that it is a matter of surprise that Darab Sahib, the owner of an all-around personality, kept these manuscripts safe. He said that it is the need of the hour to bring these manuscripts to the public so that the new generation can get acquainted with this great capital and at the same time feel proud of their glorious past.
It is noteworthy that in Kashmir from the 14th to the 19th century, Persian emerged as the language of administration and all types of writing, including historical, literary, religious etc., were written in Persian. In such a situation, such an exhibition is of great importance in Kashmir, which is called Iran Sub-region.
During the conversation with Zubair Qureshi on this occasion, former bureaucrat Muhammad Shafi Pandit said that the services of the Darabo family are unforgettable, especially the work of Muhammad Amin Darab is the important capital of the Kashmir valley. He said that he feels very happy to put these rare manuscripts on display for the public.
(Except for the headline, this story has not been edited by GOVT.in staff and is published from a syndicated feed.)