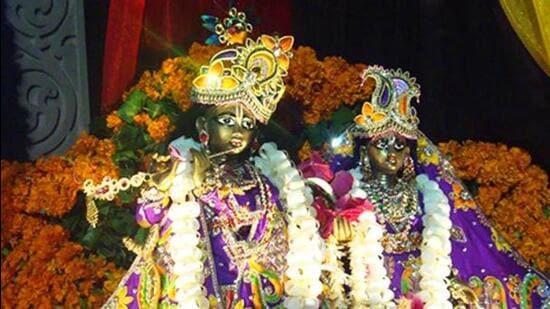 Janmashtami 2022 :  Mathura and Vrindavan, where Lord Krishna is believed to have been born and spent his formative years, will be at the centre point of the biggest celebrations across the globe

The Uttar Pradesh police have amped up security across the state in view of the Janmashtami festival on Friday when chief minister Yogi Adityanath is expected to offer prayers at the Krishna Janmabhoomi temple in Mathura.

The festival, also referred to as Krishna Janmashtami, Gokula Ashtami, Krishna Asthami or Srijayanti, marks the birth of Lord Krishna, who is believed to be the eighth incarnation of Lord Vishnu.

Mathura and Vrindavan, where Lord Krishna is believed to have been born and spent his formative years, will be at the centre point of the biggest celebrations across the globe.

A detailed advisory has been issued to all district police chiefs to maintain law and order, senior police officials said.

“Cops in civil attire will also be posted at strategic places to prevent any untoward incident. The force has orders to respond immediately on all information, be it a petty issue or a big incident,” the officer quoted above said.

Anti-sabotage checks will also be carried out at crowded places and strict vigil is also being maintained through drones and CCTV cameras, officials said.

“The advisory for the festival includes round-the-clock monitoring of social media platforms to curb fake and misleading posts, and also quickly contradict rumors,” a senior official said, adding that patrolling too has been intensified.

Wendy’s Employee In US Charged With Murder After Customer He Punched Dies
Salman Rushdie Attacker In Video From Jail: “I Don’t Like Him Very Much”