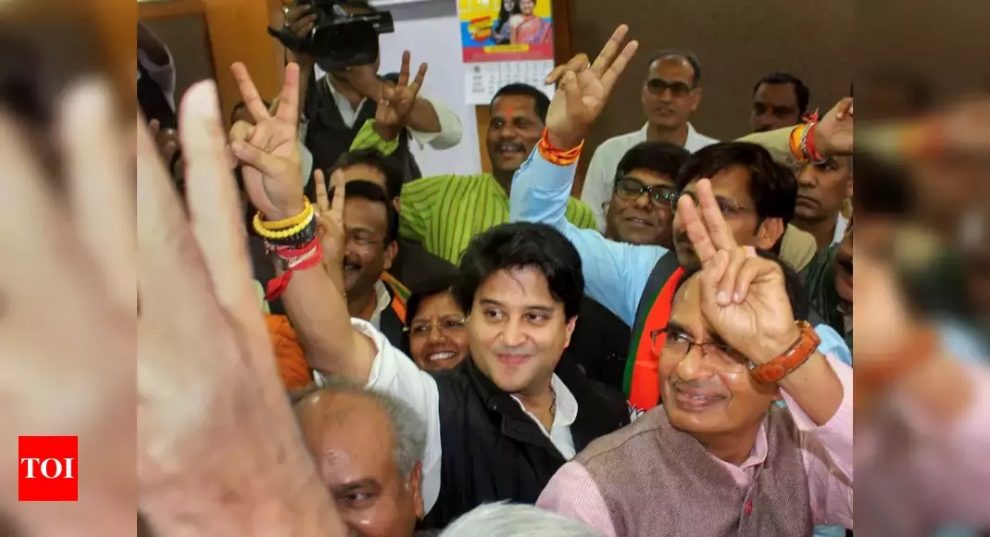 BHOPAL: Senior Congress leader Digvijaya Singh on Tuesday hit out at Jyotiraditya Scindia, saying that he ‘auctioned’ Madhya Pradesh’s mandate, and also refuted the claims that Scindia was denied ticket for the Rajya Sabha by the party leadership.
The reason Scindia left the Congress was he wanted to become a Union minister once again, Singh alleged.
Scindia quit the party to join the BJP earlier this month, triggering the fall of the Kamal Nath-led Congress government and paving the way for the saffron party’s Shivraj Singh Chouhan to take oath as Madhya Pradesh chief minister on Monday.
In an open letter, Singh said, “When Scindia himself went out to auction Madhya Pradesh’s mandate, (Prime Minister Narendra) Modi, (Union Home Minister Amit) Shah were obviously present there to grab it. But auctioning ones own house cannot be termed an honourable deal.
“It is a very painful development. It has decimated the hopes and struggles of not just the Congressmen but all those who believed in the Congress ideology, Singh said.
In the 2000-word letter, which he also shared on Twitter, Singh further said, “Scindia joined the BJP at a time when the saffron government (at the Centre) is trying to divide the country as per the RSS’s agenda. Some people are saying as there was no possibility for Scindia to get proper post and honour in the Congress, he joined the BJP, but this is wrong. If he wanted to become Madhya Pradesh Congress president, then it had been offered to him in 2013 but then he preferred to remain a Union minister,” the senior Congress leader claimed.
“In 2018 too, after the Congress won the state polls, it had offered him the deputy chief ministers post, but Scindia refused it and insisted on making his supporter Tulsiram Silawat deputy CM. But Kamal Nath did not agree, and the recent development has proved he (Nath) was right as Silawat joined the BJP at a time when the dreaded coronavirus has turned into a pandemic and as the states health minister, it was his primary responsibility (to tackle it),” the former chief minister said.
“Scindia wanted to make this person deputy chief minister but he was not only found to be against the Congress’s ideology but also highly irresponsible,” Singh alleged.
The Congress leader also refuted the allegations that the party did not want to offer Scindia a Rajya Sabha seat.
“As per my information, nobody opposed it as the Congress had the requisite number of MLAs to win two seats of the upper house from Madhya Pradesh. So it was not an issue. The issue was (he wanted to become) a minister in the central government, and at present it is only possible for Modi and Shah to offer that,” Singh alleged.
“…all those people in the country who are fighting against the RSS’s ideology without any greed, they are all with Congress because the country is standing at ideological cross roads. At this juncture, Scindia’s joining the BJP only proves that he wanted to use Congress workers’ and supporters’ struggle and ideological commitment only for his own personal power. As long as there was guarantee of power in the Congress, he remained with it, when it is weakened, he went to the BJP,” Singh further said.
He also said that the party gave Scindia a lot of opportunities and he was close to Congress president Sonia Gandhi’s family. Singh also claimed that he, alongwith late Arjun Singh, brought Jyotiraditya’s father late Madhavrao Scindia into the Congress’s fold in 1979 on the directive of Sanjay Gandhi.
Singh pointed out that he himself stayed away from power for ten years after the Congress lost power in the state in 2003 because of his personal commitment to the party.