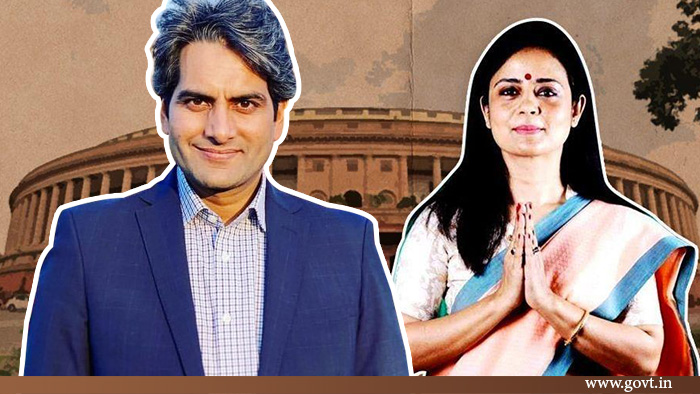 TMC leader Mahua Moitra is in the buzz for quite obvious reasons. Her speech in the parliament raised many voices; some said her speech was plagiarised while others praised her for her outspoken maiden speech, which talked about ‘seven early signs of fascism.‘

What they are saying-

The first person to raise the voice against Mahua’s speech is Zee News editor-in-chief, Sudhir Chaudhary. He called Moitra’s speech ‘hateful’ In the broadcast show DNA (Daily News and Analysis). Then after he claimed that her speech was plagiarised from a 2017 article which spoke about ‘12 early warning signs of fascism’ in US President Donald Trump’s America.

Apart from highlighting the scene on DNA show, he talked about the same on his Twitter account. He tweeted the video of his show on Twitter with a caption that says:

Soon after, several other people, including a few political leaders, retweeted the same.
Not agreeing with the accusations Mahua Moitra on July 4, proposed a breach of privilege motion in Lok Sabha against Zee TV and its editor-in-chief Sudhir Chaudhary.
According to ANI,

TMC MP Mahua Moitra in Lok Sabha: “I have submitted a breach of privilege motion today against Zee TV and its editor Sudhir Chaudhary for falsely reporting my maiden address in this House.”
Speaker Om Birla disallowed it. pic.twitter.com/f9u3VdNlWZ

How accurate is the accusation?

Chaudhary affirmed that Moitra’s speech was plagiarised from an article authored by Martin Longman. The ‘supposed’ article was published in Washington Monthly. The article titled “The 12 early warning signs of fascism” pointed to United States administration under President Donald Trump. He also wrote that the same signs were listed in the Holocaust Museum.

Zee TV editor Chaudhary while tweeting Longman’s article, alleged that Moitra’s speech was plagiarised. He captioned his images with a caption that says,
“She has lifted the words directly from the article. The honor of a Parliamentarian is in danger.”

After Chaudhary, many other people, including Shobha De, Makarand Paranjape, Kanchan Gupta, and Vivek Agnihotri, made similar claims.

In the complete video of Moitra speech, at 6:32 minute, she speaks about the poster that was put up in the United States Holocaust Memorial Museum in 2017 which carried a list of all signs of early fascism.
“Each of the seven signs I have pointed to you, features on that poster,” she says.

She also issued a clarification on Twitter and said, “This, allegation of plagiarism, is a clear attempt by the troll army of the BJP and certain media houses owing allegiance to the ruling party to obfuscate the real issues.”

Not only Moitra, but Longman himself tweeted that Moitra was falsely accused of plagiarism.

I’m internet famous in India because a politician is being falsely accused of plagiarizing me. It’s kind of funny, but right-wing assholes seem to be similar in every country.

Final Take on the controversy-

Despite the clarification made by author Logman himself is a clear representation of no plagiarism of his content- Sudhir Chaudhary’s tweet featuring allegations is still live on Twitter.

This isn’t the first time when Sudhir Chaudhary fell into a controversy of such nature. The previous case of ‘false allegations’ was being made on Deepika Singh Rajawat, former counsel for the family of the eight-year-old girl from Kathua who was gang-raped and brutally murdered. Sudhir Chaudhary alleged that she is driving whooping donation from the case. This led to a legal notice on him for broadcasting a false report on their show DNA.

News Media is losing its value in the eyes of people because of the false representation and dissemination of irrelevant news. Being a qualified journalist, please be responsible while broadcasting news to the masses -only a request.

Fact Check: Pulwama Attack videos are spread across with misinformation

No More Govt. Ads- Is This The Direct Threat On Print Media?
Fact Check: Quote Defaming ABP And UP CM Yogi on Social Media