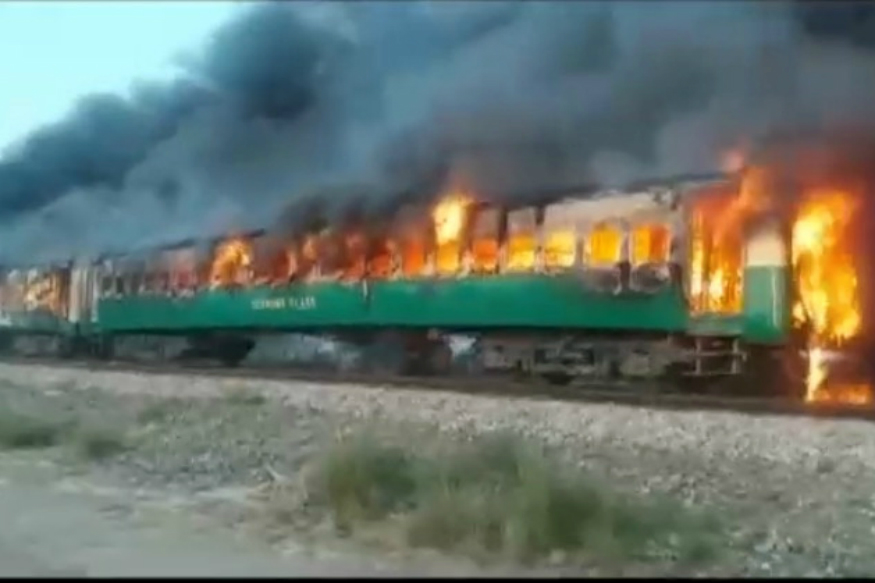 At least 65 people were killed and dozens injured after cooking gas cylinders exploded on a train packed with religious pilgrims in Pakistan on Thursday, authorities said.

Television footage showed flames pouring out of three carriages as people could be heard crying in the incident, in a rural area of central Punjab province.

Some of the passengers — many of whom were religious pilgrims traveling to a congregation in the eastern city of Lahore — had been cooking breakfast when two of their gas cylinders exploded, Ali Nawaz, a senior Pakistan Railways official, told AFP.

Many Pakistanis carry food on long train journeys, but gas cylinders are banned, and Nawaz said an inquiry had been ordered.

Dozens of people were crowded onto the tracks staring at the burning carriages, which had been disconnected from the rest of the train, television images showed.

Firefighters later rushed to the scene near Rahim Yar Khan district, extinguishing the blaze. Rescue workers and the army could also be seen as bodies were carried away covered in white sheets.

“According to information reaching us from the site of the accident, more than 65 people were killed, and over 40 injured,” provincial health minister Yasmin Rashid told AFP.

The wounded were being rushed to hospitals in the nearby city of Bahawalpur, and elsewhere in Rahim Yar Khan district, she said, adding that only 18 of the bodies were identifiable.

“Deeply saddened by the tragedy… My condolences go to the victim’s families & prayers for the speedy recovery of the injured,” tweeted Prime Minister Imran Khan.

“I have ordered an immediate inquiry to be completed on an urgent basis.”

‘Could have been avoided.’

Khan said the train was the Tezgam, one of Pakistan’s oldest and most popular train services, which runs between the southern port city of Karachi to the garrison city of Rawalpindi, next to Islamabad.

But the railways official Nawaz said it had been diverted to facilitate religious pilgrims traveling to Lahore for a congregation there.

The majority of those killed were pilgrims from southern Sindh province, he said.

Nawaz said two of the carriages were economy coaches, while one was business class, and that up to 88 passengers can fit into each carriage.

Local media reported that some passengers had died when leaping from the still-moving train to escape the blaze. Nawaz said officials were still trying to confirm the details.

“A tragedy that could have been avoided, but ever since I can recall while traveling by train, no baggage check or restrictions enforced. Tragic,” human rights minister Shireen Mazari tweeted.

Train accidents are common in Pakistan, where the railways have seen decades of decline due to corruption, mismanagement, and lack of investment.

In July, at least 23 people were killed in the same district when a passenger train coming from the eastern city of Lahore rammed into a goods train that had stopped at a crossing.

Khan was elected last year on promises to build an Islamic welfare state, but an ongoing economic slowdown and austerity measures have hampered efforts to invest in infrastructure and social programs.

Rural Punjab has witnessed several gruesome accidents over the years.

These included an oil tanker explosion in 2017 when more than 200 people were killed after the truck crashed on a main highway in central Punjab province while carrying fuel from Karachi to Lahore.

It exploded minutes later, sending a fireball through crowds from a nearby village who had gathered to scavenge for the spilled fuel, despite warnings by the driver and police to stay away.

(Except for the headline, this story has not been edited by GOVT staff and is published from a syndicated feed.)

What’s happening in Bengaluru this weekend? Details for your planner

WhatsApp verifies: Israeli spyware was used to pry on Indian journalists, activists
J& K And Ladakh are now 2 Union Territories From Today, Know What Has Changed