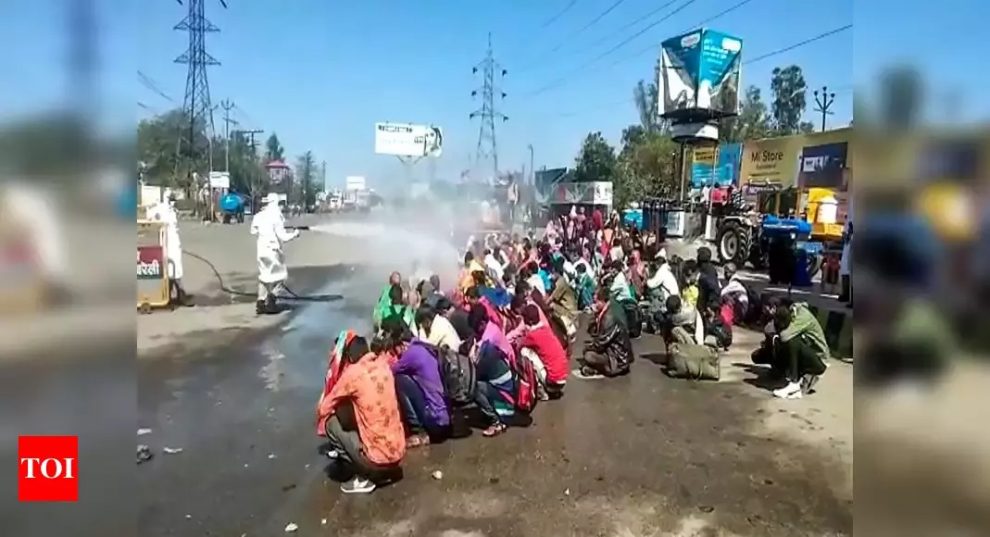 BAREILLY: Several batches of migrant workers, including women and children, who arrived in UP from Delhi/NCR in government-run buses over the weekend were made to squat on a road in Bareilly district and sprayed with sodium hypochlorite — a bleaching agent which authorities later admitted was “unfit for use on humans” — in a bid to sanitise them.
After the incident on Sunday attracted widespread criticism, joint secretary (health ministry), Lav Agarwal, blamed it on the “over zealousness of officials who acted out of fear”. The secretary clarified that this was not part of any protocol and was not required.
The Bareilly district administration has now set up a team to investigate the matter. District magistrate Nithish Kumar said treatment would be provided to anybody adversely affected by spraying of sodium hypochlorite. The DM also attributed the incident to “over-cautious” personnel. “They should not have done this, but fortunately no one was harmed,” he told TOI.
City mayor Umesh Gautam admitted “negligence on part of the municipal corporation” and said directions have been issued to not repeat this in future.
The incident occurred after a sanitisation team from the municipal corporation and fire personnel were sent to sanitise the locality of a Covid-19 patient. While returning, they reached Satellite Bus Stand in the city and were disinfecting buses when they started spraying the solution on those who were arriving in the vehicles as well.
A video of the incident shows personnel directing people to close their eyes as the bleaching agent gushes out of a hosepipe and cops look on. Senior superintendent of police (Bareilly) Shailesh Pandey has claimed that police was not involved in any way in the exercise.
Municipal commissioner (Bareilly) Abhishek Anand admitted that the chemical solution was only meant for sanitising roads, walls and metallic surfaces and was “not fit for use on humans”. Chief medical officer Vineet Shukla also added that the solution was likely diluted else it could have had adverse effects.
In a press conference later, Awanish Kumar Awasthi, additional chief secretary (home), defended its use, claiming that sanitisers can be sprayed on any person without fear as per international norms.
Later in the day, BJP IT cell chief Amit Malviya tweeted that agencies in Kerala are mass spraying people, “…But all the outrage is only reserved for UP, because a saffron clad monk of the BJP is the chief minister and he is doing a good job.” Kerala officials were quick to clarify. “We have not used any kind of chemical or disinfectant on humans. What was sprayed by our personnel at Wayanad was diluted soap solution,” said director General of fire and rescue force, A Hemachandran.
Priyanka Gandhi shared a video of it on Twitter on Monday, calling it an ‘inhuman act’.
(With inputs from Maria Khan)

Govt: Lockdown working, but need to be on our toes
States taking over star hotels across India