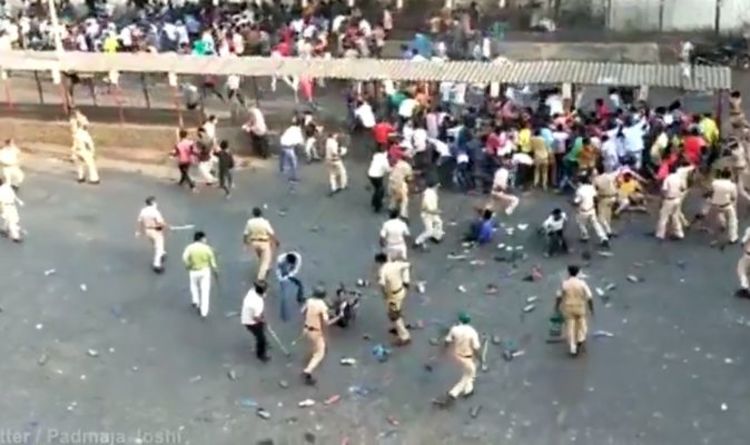 The suffering, frustration and despair of 40 days in lockdown began to brim its banks on Monday as tides of migrants desperate to return home to UP, Bihar, Jharkhand and West Bengal from Surat clashed with police and torched vehicles.
Angered over the delay in sending them home, hundreds of migrant workers turned violent in Bengaluru following rumours that the temporary camp near Bangalore International Exhibition Centre, where they had gathered, was nothing but a quarantine facility. Four police personnel were attacked and a few police vehicles were damaged. Police had to resort to a lathicharge to rein in the restless workers who threw stones at the cops.
There was growing resentment in Ahmedabad, too, as migrants ran from pillar to post on learning they had to physically register themselves for the journey home and had to be dispersed by police when too many gathered at the collectorate even as the state said at least 21,500 had already been sent home.
The failure to anticipate their desperation, and to communicate effectively, was apparent. Many didn’t seem to know they had to register. A lot of people had their forms rejected for minor errors. And others found they had to fill out a new, entirely different form.
In Mumbai, Mohammad Hanif, a migrant from UP’s Balrampur who had waited at Kajupada police station in Saki Naka for five hours, said, “There was such a crowd that police hit us on our legs with sticks. They told us to leave and said they would not accept our forms today. This whole thing is a farce. Finally, the only way to get home will be on foot.” He had tried to leave once before, on a truck, but had been sent back from Powai.
In Pune, police resorted to a “mild lathicharge” after a crowd of 500-600 migrants gathered at Warje police station to fill forms and blocked the road.
As queues outside Mumbai’s police stations swelled, the anger and frustration was palpable. Many complained the forms they submitted at the police stations were rejected for minor errors after they had waited half the day to submit them.
“I spent 10 hours getting a medical certificate yesterday. But police did not take the application saying there was some new form now,” said Altaf, a migrant worker in Mumbai. “My employee’s form was rejected because they said the surname was wrong. Another was rejected because the destination Banda district was not found,” said Imran Khan, a social worker from Sewree. DCP Pranay Ashok, though, said, “We are accepting whatever forms are being submitted, irrespective of the destination state.” He also refuted claims of a lathicharge in the area.
Over the past few days, 35,000 migrant workers in relief camps in Maharashtra have been sent to their home states, said officials. But the demand is much higher. By Monday, Mumbai had received 35,000 applications and Pune 15,502.
In Tiruppur, Tamil Nadu, a crowd of about 100 workers that had thronged the station to board trains going from Kerala to states in the north were made to move to a temporary camp at a municipal school to register themselves. The crowd here soon swelled to 5,000 people tired of waiting. In Vellore, a crowd of 200 migrant workers protested at the SP’s office to demand passes to leave the state. Though most workers wore masks, social-distancing norms were nowhere to be seen at Tiruppur station.
In Ahmedabad, Mohammed Shakil Alalm, a construction worker from Katihar, Bihar, said he was told by his fellow workers that migrants would be registered at the collectorate and taken to their destinations from Sabarmati railway station. “There was no such thing and I was shooed away. I do not have a job, nor money, so I do not know where to go for help,” Alam said.
After the lockdown was imposed on March 23, migrants in Surat have resorted to angry protests several times. Monday’s violence began when a large group, including women, who were already furious at being sent back from Gujarat’s borders on Friday night, resorted to heavy stone-pelting and vandalising vehicles in Vareli, a textile manufacturing cluster adjoining Surat. Police used at least 40 teargas shells and resorted to a lathicharge as the mob was unrelenting. Teams of policemen were seen chasing the migrants into lanes. About 200 people were arrested for rioting.
“At least 3,000 workers were involved in the rioting, and a few of them even hurled acid bottles on cops,” IGP (Surat range) Rajkumar Pandian said.
Radhey Shyam Tripathi, a textile worker from Varanasi, said he would not return to Surat again. “Humko kutton ki tarah bhagaya gaya Dahod se (We were chased away like dogs from the Dahod border),” Tripathi said, adding, “We spent money from our own pockets to reach our native places. Still we faced humiliation and were sent back. Our crime is that we want to go home.” Girishanker Mishra, from Gaya in Bihar, said, “If this is the treatment we are getting in Gujarat, we will not return. We had a very humiliating experience at Dahod. They (cops) treated us like terrorists.”
The bus carrying Tripathi and 56 fellow workers was recently sent back from Dahod checkpost by police. Many others like him, from UP and Bihar, feel neglected when they see migrant workers from states like Rajasthan, Odisha, Jharkhand and Madhya Pradesh leaving by buses and special trains.
In Valsad district too, hundreds of labourers had blocked the roads but later relented.
According to railway officials in Gujarat, as of Monday evening, 13 trains carrying 15,558 passengers had left for UP and Odisha, while two more trains were expected to leave for Dhanbad, in Jharkhand, and Patna, in Bihar, late on Monday. Of the 13 trains that have already left, four went from Ahmedabad, one from Palanpur, one from Vadodara and seven from Surat.

What happened in Nizamuddin is unfortunate, but targeting a community for it is unacceptable: YS Jagan Mohan Reddy