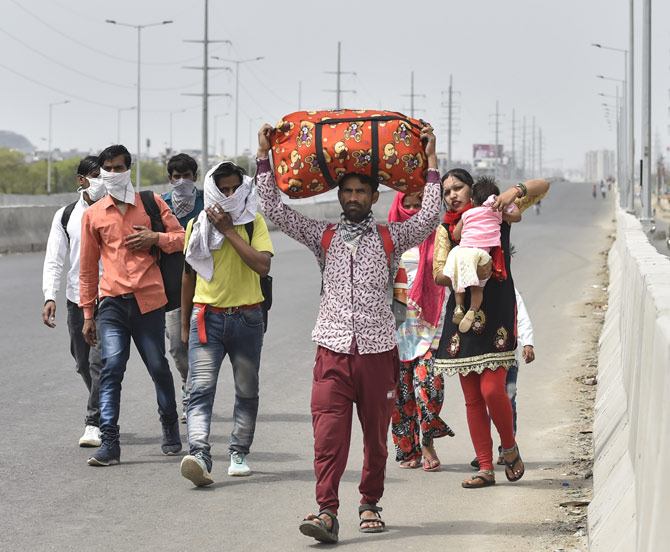 RAIPUR/MANDYA/JAIPUR: Fourteen migrant workers in institutional quarantine since returning to their native Chhattisgarh tested positive for Covid-19 on Sunday, but even more alarming was the spectre of infections travelling undetected across inter-state borders as Karnataka and Rajasthan on Monday reported three new cases where the returnees had sneaked in without being screened.
The fresh cases in Chhattisgarh represent the biggest spike in the state’s coronavirus cycle, coming when only seven patients were left in hospital. With another person testing positive on Monday, Chhattisgarh’s Covid count now stands at 55. Before the 14 migrant workers, three returnees from Jharkhand had tested positive.
In Karnataka’s Mandya, two people tested positive just over 10 days after violating the lockdown to drive down to their village from Mumbai. Deputy commissioner Venkatesh said they arrived in Karnataka along with some family members in the same car on April 23.
Both have been shifted to the isolation ward of Mandya Medical College. “We are trying to identify and locate the primary and secondary contacts of these patients,” Venkatesh said.
Rajasthan, too, braced for a potential spread of Covid-19 through migrant workers illegally coming in from Gujarat after a native of Kasba village in Dungarpur became the tribal district’s sixth positive case.
Officials said the patient had crossed over on April 17, after which someone reported him to the health authorities. He was put in institutional quarantine after being caught roaming about on April 23. His first report on April 24 was negative, but the second sample taken on Sunday came out positive.
The village has been sealed. “Many migrant workers are walking back to Rajasthan from Gujarat, using country roads to skirt the border checkpoints,” district chief medical health officer Mahesh Parmar said.
On Monday, the Ratanpur checkpoint on the Rajasthan-Gujarat border was chock-a-block with migrant workers for the eighth consecutive day. Long queues for registration and screening and fear of being put in quarantine are driving some migrant workers to try and sneak in through other routes, an official said.

Watch: Ahead Of Independence Day, India Gets Best Wishes From Space