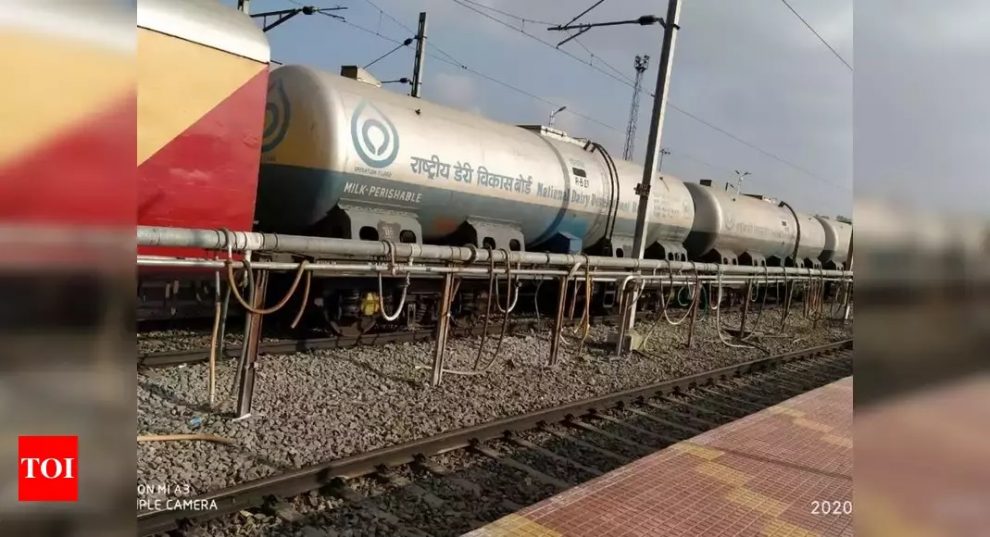 NEW DELHI: Freight trains running at 110 kmph may sound impossible, but on Saturday morning a “Duronto Doodh special” carrying six milk tankers with total quantity of 2.4 lakh litres from Renigunta in Andhra Pradesh is started. The train running at 110 kmph is scheduled to reach Delhi’s Hazrat Nizamuddin station in 36 hours.
With railway corridors being completely rid of passenger trains due to lockdown has increased the speed at which cargo trains are running. Before lockdown, the average speed of freight trains was around 25 kmph.
South Central Railway, which is operating the special milk train, said two parcel vans were dispatched on Saturday from the same station to Secunderabad and Guntakal carrying 23 tonnes of mangoes and 23 tonnes of musk melon respectively. It said on an average 180 freight trains are being operated daily to ensure there is no shortage of essential commodities in different parts of the country.
The railway ministry on Friday had claimed that over four lakh wagons of essential commodities were transported by all zones between March 24 and April 2 to keep the supply chain functional. Of these, more than 2.23 lakh wagons carried essential commodities like food grains, salt, sugar, milk, edible oil, onions, fruits and vegetables, petroleum products, coal and fertilizers.
Milk has been the most preferred commodity to be sent through parcel trains. out of the first 30 special parcel trains that were pressed to service ,10 transported milk and milk products while a few of the trains carried seeds and dry grass besides miscellaneous items.
Meanwhile, for faster movement of loaded trucks, some of the railway zones are also looking at Roll-On Roll-Off (RORO) service in which loaded trucks are transported through freight wagons. This will ensure trucks to move fast and without any hindrance and for last mile connectivity, these trucks can deliver items at destinations.
Sources said while a fully loaded truck takes around 14-15 days by road to reach from Jammu to Kanyakumari, by using the RO-RO service this distance can be covered in 5-6 days.
RORO is a service where trucks and cars ride piggy-back on specially designed wagons. While Konkan Railway has been running such trains for over a decade, Indian Railways had first launched the service in March 17 when 30 fully loaded truckers were transported on the flat wagons from Garhi Harsuru station in Gurugram to Muradnagar in Uttar Pradesh.
Railway officials said RORO service could prove crucial on certain routes and more so when delay of loaded trucks on road for any reason may impact the supply of essential items.

NGOs get easier access to FCI grains to feed the poor