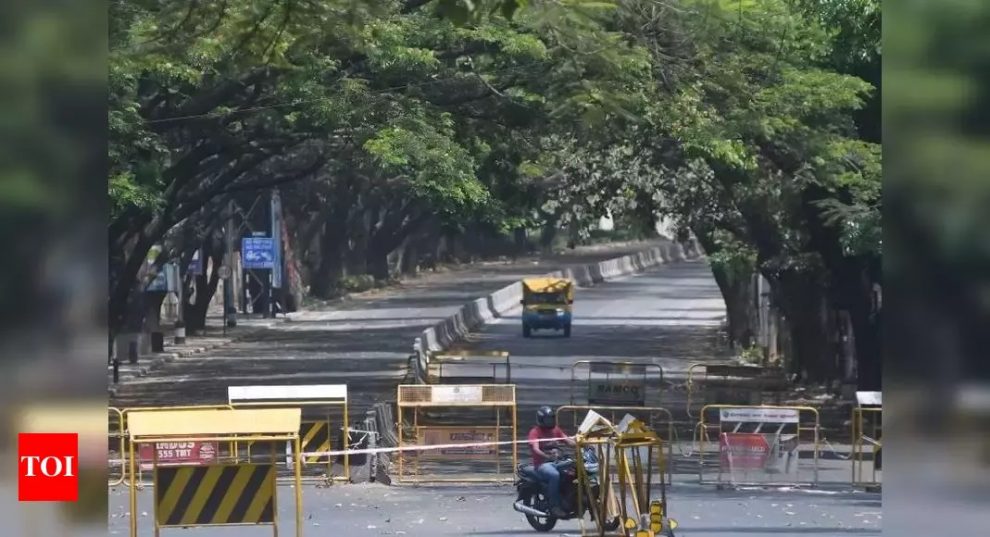 NEW DELHI: Former Union finance minister and Congress leader P Chidambaram on Wednesday described the lockdown announced by Prime Minister Narendra Modi as a “watershed moment” in the battle against COVID-19 and called Modi as the commander and the people as “foot soldiers”.
In a statement, Chidambaram also suggested a 10-point plan to put money in the bank accounts of the poor and the marginalised, including farmers and labourers, and demanded a cut in GST rates by 5 per cent on all wage goods, essential goods and services, and all goods of mass consumption from April 1 to June 30, 2020.
“The prime minister’s announcement yesterday of a nationwide 21-day lockdown is a watershed moment in the battle against COVID-19. We should put behind us the debates that took place before March 24 and look upon the nationwide lockdown as the beginning of a new battle in which the people are the foot soldiers and the PM is the Commander.”

My statement on the current lockdown and how the Government can help make it better. ⁦@PMOIndia⁩ ⁦@narendramodi⁩ ⁦… https://t.co/ElfqwkoM4u

“We owe a duty to extend our total support to the prime minister and the central and state governments,” he said.
A senior Congress functionary, however, said this was Chidambaram’s personal view and not that of the party.
Prime Minister Narendra Modi on Tuesday announced a complete lockdown of the entire country for 21 days in an unprecedented drastic measure to try halt the spread of coronavirus shortly after which the Centre said all road, rail and air services will remain suspended during this period.
Chidambaram also urged people to stay home, saying “STAYHOMEINDIA is a great rally cry”.
He also called for protection of the current employment and wages, besides putting money into the hands of the poor and the marginalised.
More on Covid-19
“Here is a 10-point plan (without too much elaboration) which is intended to put cash and food immediately in the hands of the poor and the vulnerable. It is placed for the consideration of the government and for an immediate announcement of relief,” he said.
Chidambaram called for doubling the amount paid/payable under PM-KISAN to Rs 12,000 and transfer the additional amount immediately to the bank account of each beneficiary.
For tenant farmers, he called for bringing them under PM-KISAN after taking the lists from the state governments and transfer Rs 12,000 (in two installments) to the bank account of each tenant farmer.
He also demanded transferring Rs 3,000 into bank accounts of registered MGNREGA workers.
For the urban poor, the former FM demanded transfer of Rs 6,000 into their Jan Dhan accounts, besides offering 10 kg of rice or wheat absolutely free, as a one-time measure in the next 21 days to every ration card holder.
The former union minister called for asking all registered employers to maintain current levels of employment and wages.
“Guarantee to such employers who do so that the wages of the employees will be reimbursed by the government within 30 days of payment,” he said.
Chidambaram also called for opening a register in every ward or block and invite persons who have not received payment under any of the categories. These, he said, include street people and destitutes.
After minimal verification, open a bank account in each name (if there is not already one), seed it with Aadhaar and transfer Rs 3,000 into each bank account, he said.
Chidambaram also sought extension of deadlines for payment of any kind of tax until June 30, 2020. In the interim, banks can be instructed to lend to panchayats, municipalities and corporations against the security of the tax receivables.
He said banks should be instructed to extend the date for any kind of EMI payment until 30 June 2020.
The former finance minister said these steps are for the present, one-time cash transfers and the need for more cash transfers can be assessed depending upon the situation as it evolves.
“This plan would address only the immediate challenge of putting cash in the hands of the people who will STAY HOME. There are many other challenges that have to be addressed in the next few days,” he said.

Lakhs of labourers left without succour in UP after Coronavirus lockdown
Coronavirus: HC directs MEA to ensure safety of Indian students stranded in Kazakhstan

You can now recover WhatsApp messages ‘deleted for you’ within seconds: Report

Many states, many kinds of passes. What works?