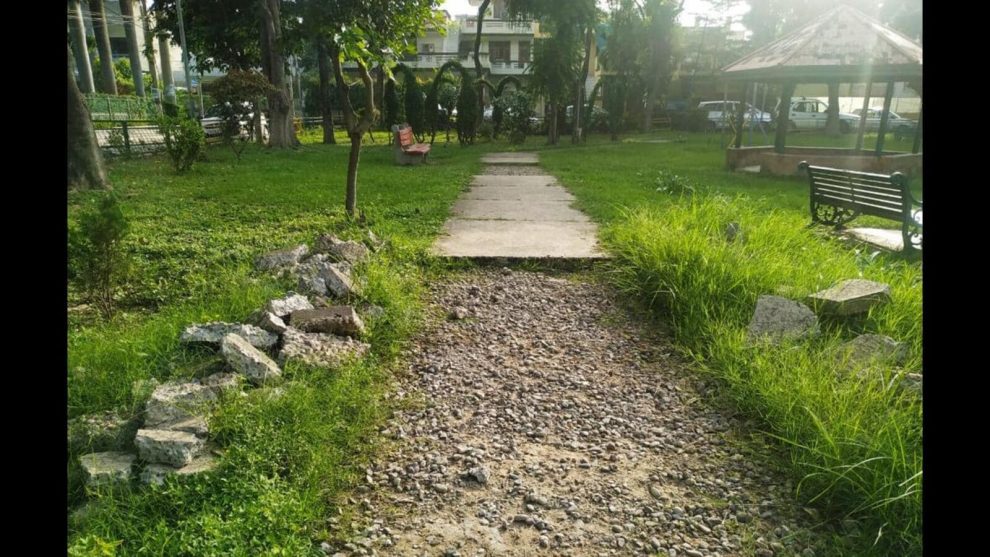 Chandigarh News :  Seemingly forgotten by Mohali MC that holds the charge of maintaining the parks’ infrastructure, RWAs’, in the absence of timely payments, have been struggling to keep their maintenance in order The paver blocks at the park near House Number 539 in Phase 1 are broken, while wild growth invites all sorts of insects and reptiles.

Broken pathways, rusting benches and non-functional lights are what is left of the park near one kanal houses in Phase 1, the oldest phase of Mohali city.

Once a hub of community interaction and recreation, the park, located near House Number 539, is now home to weeds and vermin, enough to keep residents away. Six months ago, the municipal corporation handed over the park’s charge to the One Kanal Residents’ Welfare Association. But the payment of funds needed for its maintenance seems to have slipped its mind.

“MC handed over the park to the RWA with the assurance of regular payments, but they have not paid any money till date. Whatever little maintenance takes place is through the contributions of residents,” said Harinder Kaur, president of the association.

While forgetting to pay the RWA, MC has also failed to repair the park’s run-down infrastructure.

“The paver blocks are broken, rainwater continues to stand in low-lying patches for days, leading to stench and mosquito breeding, while wild growth invites all sorts of insects and reptiles. The park has some play equipment for children, but most are broken, posing risk of serious injury,” said Dr Sarabjeet Kaur, a resident.

The situation is quite similar at the park in Sector 64, which residents avoid visiting due to overgrown weeds and fear of reptiles. An office-bearer of the local RWA, which maintains three parks in the sector, said poor maintenance was the result of irregular payments from MC: “For how long can the residents foot the bills?”

The city has 600 neighbourhood parks, of which 150 are maintained by RWAs, but the infrastructure of all parks remains under MC’s ambit, albeit to little effect.

For parks’ upkeep, the civic body pays the RWAs ₹4.23 per square metre per month, which comes out to around ₹6 lakh a month for around 56 acres of park land. While the payment date is fixed as 7th of each month, MC often fails to keep up with it.

Gurdev Singh, a resident of Sector 64, said due to non-functional lights and wild growth, children cannot play in the parks in the evening: “Even the elderly avoid it for walks.”

At the few parks that are in prime shape, RWA members, apart from pitching in funds, can be seen putting hands-on efforts.

“Parks are a place of solace for locals. They should feel at peace when entering a green belt. So, even if payments from MC are delayed, we make sure to keep the park in shape with well-maintained plants and trees,” said a member of the Sector 65 RWA that is maintaining three parks.

Gurmail Singh Mojowal, president of the Phase-11 RWA, that takes care of three parks in the area, said, “At times, when the payment is delayed from MC’s end, we pay from our own pockets. Residents even pitch in with the gardening tasks when needed.”

Another resident, Balbir Singh Saini said three gardeners maintained the parks daily. “Any broken infrastructure, such as benches or play equipment, are replaced promptly and reimbursement request is filed with MC. The parks are not just our pride but also delight visitors from other areas.”

In Sector 67, the RWA looks after six parks, all well-manicured. The bright lawns are complimented by a variety of trees and seasonal flowers. “We make sure that gardeners for all parks visit daily and members supervise their work personally. We never allow weeds to grow,” said Rashpal Singh, president of the Sector-67 RWA.

Area resident Ajaib Singh said the RWA had received appreciation from the civic body too: “Apart from perennial plants, we visit nurseries for annuals and biennials to ensure the parks always remain vibrant in any season.”

On MC’s part, superintending engineer Naresh Batta said, “We try and pay the RWAs on time, but sometimes the budget doesn’t allow it amid focus on other projects. We will soon hold a meeting with RWAs and try to arrive at a balanced solution.”