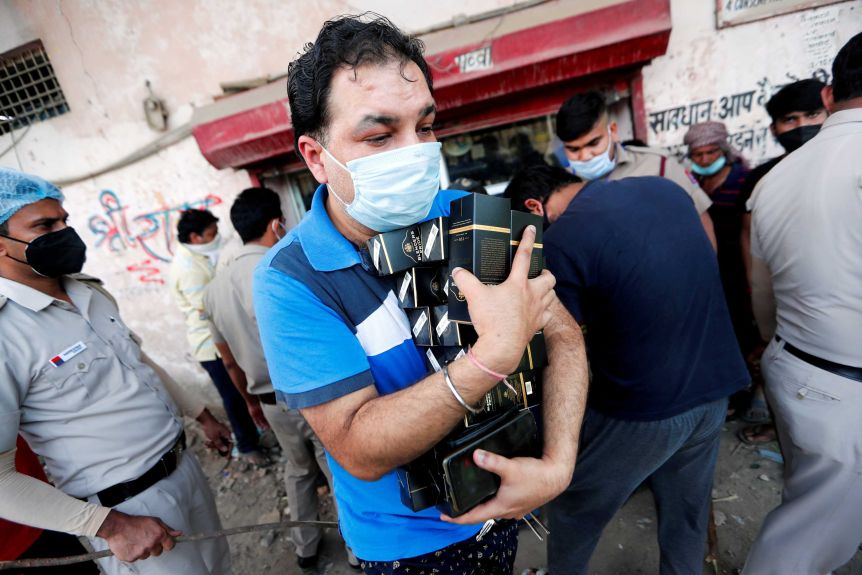 NEW DELHI: Liquor shops across the country did roaring business on the second day on Tuesday after the government allowed sale during the lockdown, as cities witnessed long queues — and less chaos — all through the day.
But, it was bad news for Mumbai as the Brihanmumbai municipal corporation (BMC) on Tuesday decided to withdraw the relaxation in Mumbai city, fearing this may lead to deterioration of the coronavirus situation.
This followed large crowds gathering near liquor shops without following social distancing norms even on Day 2 on Tuesday, as people feared shops may be shut soon.
On Tuesday, liquor stores in safe zones registered booming sales across Maharashtra. Indian-made foreign liquor (IMFL), country liquor, wine and beer worth Rs 62 crore was sold on Tuesday, a new record, a senior bureaucrat told TOI.
Coronavirus outbreak: Complete coverage
Read our coronavirus live blog for all the latest news and updates
In Mumbai, liquor vendors claimed they sold six to seven times more than the average per day sale. Several residents from Thane and Navi Mumbai came to Mulund and Chembur to buy their stock as these neighbouring cities have not allowed shops to open.
Other states too made merry as sales spiked. Liquor sales on Day 2 saw an all-time record high for a single day in Karnataka. According to excise officials, liquor worth Rs 197 crore was sold across the state on Tuesday, compared to Rs 45 crore the previous day. The previous all-time record was Rs 170 crore on December 28, 2019.
The Karnataka government is now planning to impose 5%-15% “special Covid tax” on alcoholic beverages across all categories on the lines of Delhi and Andhra Pradesh.
With these measures, the Karnataka government is looking to offset Rs 2,600 crore losses from excise revenue it suffered during the lockdown.
The enthusiasm was high all across the country. In Nainital, torrential rain and an unexpected shower of hail could not dampen the spirits of liquor buyers on Tuesday. Hundreds of them stood in queues with umbrellas, braving the downpour. Liquor stores in Nainital had finally opened on Tuesday after a gap of 40 days.
Liquor stores in Haryana reopened on Wednesday after the state government permitted the same along with the imposition of a ‘COVID Cess’ on alcohol. A day earlier, deputy chief minister Dushyant Chautala had informed that ‘COVID Cess’ will be Rs 5 per quarter in case of country liquor, Rs 20 per quarter in case of Indian-made foreign liquor, Rs 5 in case of strong beer and Rs 2 in case of other beer.
It will be Rs 50 per pack greater than 375 ML in case of imported foreign liquor, with effect from May 6.
More on Covid-19
The Andhra Pradesh government on Tuesday announced another hike in liquor prices by 50 per cent, just a day after imposing a 25 per cent increase as shops were reopened in view of relaxation given amid the Covid-19 lockdown.
The government said that the decision has been taken as a step towards “discouraging alcohol consumption”. With 50 per cent hike in liquor prices, overall rates have shot up by 75 per cent.
In West Bengal, an astounding Rs 40-crore liquor sale was recorded on the first day of reopening of the standalone shops on Monday, according to estimates provided by a trade association.
In Uttar Pradesh around Rs 100 crore sales have been reported which is again 40 to 50 per cent jump.
In Delhi, undeterred by the threat of coronavirus infection or the ”special corona fee” of 70 per cent levied on sale of alcohol, hundreds of tipplers queued up outside liquor vends for the second consecutive day on Tuesday.
Meanwhile, faced with 20-30 per cent spike in demand after liquor sales were allowed from Monday, the alcoholic beverages industry is asking state governments to allow them to operate more shifts at distilleries.
(With inputs from agencies)

‘Assalaam Alaikum!’ This is Karachi’s control welcoming Air India.. We’re proud of you’