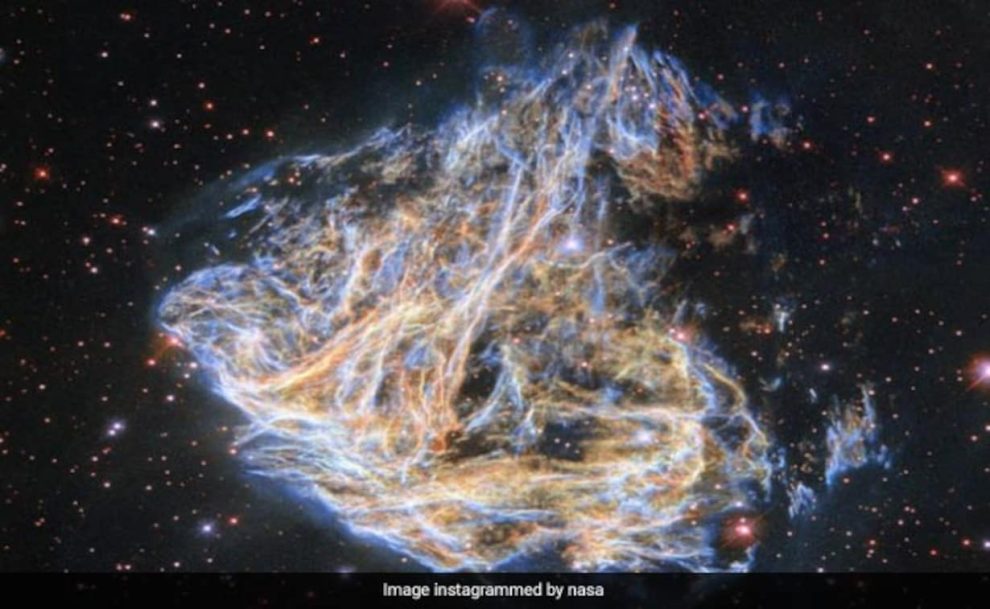 American space agency NASA’s Hubble Space Telescope recently shared a breathtaking image of the remnants of the cataclysmic death of a star 160,000 light-years away from Earth. The celestial fireworks display is located in the direction of the constellation Dorado. The delicate sheets and intricate filaments are debris from the cataclysmic death of a massive star that once lived in the Large Magellanic Cloud, a small satellite galaxy of the Milky Way.According to a press release by NASA, DEM L 190 – also known as LMC N49 – is the brightest supernova remnant in the Large Magellanic Cloud and lies approximately 160,000 light-years away from Earth in the constellation Dorado.

American space agency shared that the striking image was created with data from two different astronomical investigations, using one of Hubble’s retired instruments, the Wide Field and Planetary Camera 2 (WFPC2).

In the caption, NASA wrote, “Astronomers pointed the telescope at this supernova remnant to discern the origin of a soft gamma-ray repeater – an object that sends bursts of high-energy rays into the cosmos.”

The post has amassed more than 1 million likes on Instagram with several comments. A user wrote, “The more you see the beautiful cosmos, the more you will realize that it’s all within you, just think for a moment that you are here after 13.8 billion years, that means you are the product of the events that occurred in that much time. All beauties of the cosmos reside within you. That’s how you are.”

Another user questioned, “So this is how it actually looks or is it just a long exposure picture to where it looks like things are moving.”

“This is absolutely gorgeous. it looks like it’s morphing into the character singularity from marvel comics,” the third commented.