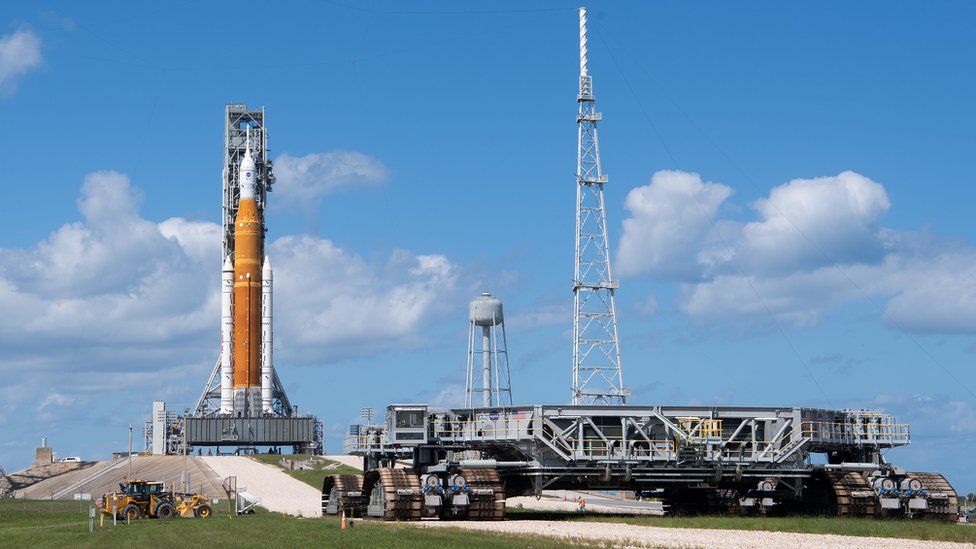 NASA’s new $4 billion moon rocket endured fierce winds and heavy rains early Thursday as it rode out Hurricane Nicole on its Florida launchpad, apparently with only minor damage, according to an early NASA inspection in the storm’s aftermath.
Sustained winds of 85 miles per hour (136.8 km per hour) were measured by launch-site sensors hundreds of feet above the ground, with gusts topping 100 mph, testing the design limits of the 32-story-tall rocket and posing added risks to a spacecraft already beset by technical glitches that have delayed its debut launch.

NASA’s wind sensor readings are made available to the public by the US National Weather Service online. The rocket is designed to withstand exposure on the launchpad to winds of up 85 mph, US space agency officials said before the storm.

The National Hurricane Center in Miami reported Nicole’s maximum sustained wind speeds on the ground at 75 mph, with higher gusts, when it made landfall before dawn on Thursday south of the Kennedy Space Center launch site in Cape Canaveral.

Rather than trying to roll the massive Space Launch System (SLS) rocket back to its hangar before the hurricane struck, NASA had opted to batten down the vehicle at the launchpad where it arrived last week prior to Nicole’s emerging in the forecast as a tropical storm.

The SLS and its Orion capsule were being prepared for a third launch attempt – following two aborted countdowns in late summer – that would mark their highly anticipated first flight and the inaugural mission of NASA’s Artemis lunar exploration program.

NASA engineers reasoned that attempting to transport the massive rocket, a 12-hour undertaking, in high winds as the storm was approaching was too risky.

“Camera inspections show very minor damage such as loose caulk and tears in weather coverings,” Free, who oversees much of the agency’s Artemis program, tweeted Thursday afternoon. “The team will conduct additional onsite walk-down inspections of the vehicle soon.”

NASA rolled out SLS to its launchpad last Thursday for a planned November 14 lift-off, aiming to conduct a much-delayed debut test flight toward the moon without any humans aboard.

“Even at that point, there was always a concern that somewhere out in the Caribbean would be a favored area for at least some development of a tropical system,” said Mark Burger, launch weather officer at the Cape Canaveral Space Force Station’s 45th Weather Squadron.

“Of course, nothing was out there at the time, so you can only go with the probabilistic aspect,” he added.

Nicole took shape as a potential tropical storm as SLS arrived at the pad, roughly 4 miles from where it had been stored inside NASA’s Vehicle Assembly Building. NASA on Tuesday postponed the rocket’s target launch date to Nov. 16, when weather officers predicted Nicole would grow into a hurricane.

A NASA spokesperson said on Thursday the agency has not ruled out a November 16 launch, but added, “It is premature to confirm the launch date while we have just started to get personnel out for walk-down inspections.”