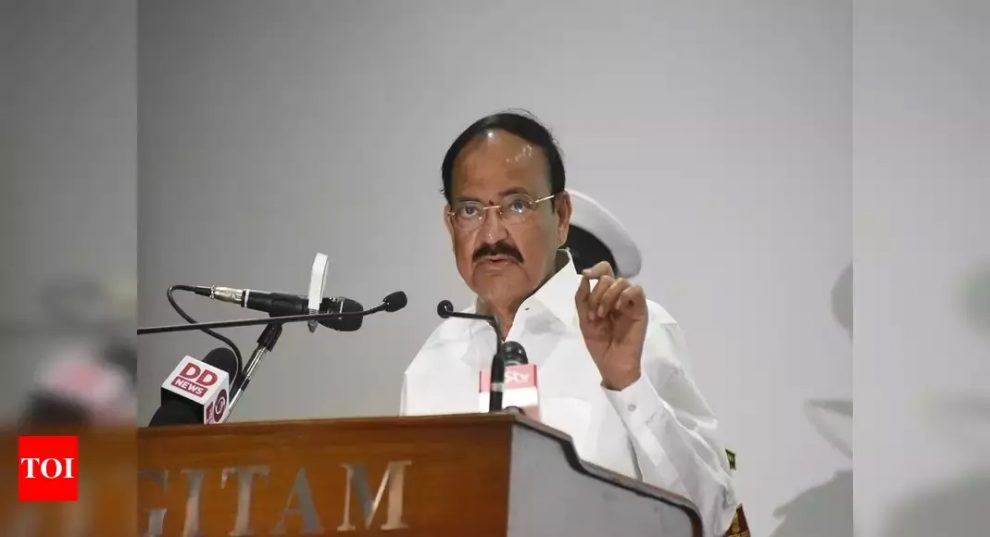 NEW DELHI: Vice President M Venkaiah Naidu on Tuesday said the final week of the ongoing lockdown is “critical” for evolving an exit strategy as data regarding the spread of coronavirus will have a bearing on the decision to be taken by the government.
He also appealed to the people to abide by whatever decision is ultimately taken by the government and cooperate with the same spirit that has so far been evident “even if it meant to continue with some degree of hardship still beyond April 14”.
The 21-day nationwide lockdown to prevent the spread of coronavirus was announced by Prime Minister Narendra Modi on March 24 and it came into force on March 25.
“As today marks the completion of two weeks of nationwide lockdown in force since March 25, I thought it appropriate to reach out to the people and the leadership of the country with my views and concerns amidst current efforts to tide over the crisis caused by the outbreak of coronavirus,” Naidu said in a statement.
The vice president said between the considerations of the health of the people and stabilization of the economy being debated, “the former shall take precedence over the later.”
“In my view, while the concerns of economy can wait for another day, that of health can’t,” he said.
Referring to the exit plan being planned by the government, Naidu said, “The next one week of lockdown is very critical for evolving an exit strategy since the data regarding the spread of virus and its rate during the next week will have a bearing on the decision to be taken.”
Amidst efforts against the virus showing signals of success in arresting its spread , came the Tablighi Jamaat congregation “which had altered the nature of the curve with most of the new infected cases emanating from this meet,” he pointed out.
“The extent of participation in this congregation and its multiplier effect has upset our expectations,” he said.
The “avoidable episode” highlighted the consequences of any slip by way of violating the rules of social and physical distancing to contain the spread of virus, he said.
“In that sense, this avoidable aberration should only be seen as an eye-opener to all others,” the vice president said.
The duration of the fight against the virus may be uncertain at the moment but we shall triumph in the end, he said.
“Wisdom lies in minimising the costs to the health and wealth of the people across the globe. India has shown the spirit to do so and this need to be sustained till the end,” he said.
“Let’s live with the hardship a little longer for a better tomorrow,” Naidu said.
The death toll due to novel coronavirus rose to 114 and the number of cases in the country climbed to 4,421 on Tuesday, according to the Union Health Ministry.

States step in to help lakhs of stranded