No More Govt. Ads- Is this the direct threat on Print Media? 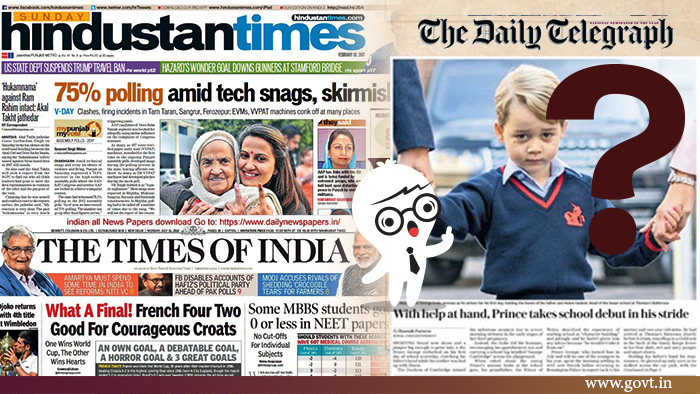 The Congress’ leader in the Lok Sabha, Adhir Ranjan Chowdhury, has accused the ruling government of stopping government advertisements to reputed newspapers namely, The Times Of India, The Telegraph, The Hindu, and Anandabazar Patrika for writing criticles based on government’s ongoing doings.

Some time ago, Chowdhury while debating about the same in the parliament said, “the media is being suppressed and advertisements being stopped because the publications raise their voice against the government.”

An investigation conducted by Digital media house The Print reveals that advertisements in The Hindu, TOI and The Telegraph were stopped earlier this year, before the general elections. While it is not clear if the “unwritten” and “unrecorded” ban continues for The Times of India and The Telegraph, it remains for The Hindu till date.

Chowdhury called this gesture by names like an undemocratic and megalomaniacal style of functioning. He alleged that the leading dailies, The Hindu and The Times of India, exposed the corruption in the Rafale deal. He also claimed violations of the Model Code of Conduct by Prime Minister Modi. Alongside the Telegraph and its sister publication, ABP was critical of him.
Under the Ministry of Information and Broadcasting (I&B), Bureau of Outreach & Communication (BOC), earlier known as the Directorate of Advertising and Visual Publicity releases central government advertisements.

On the condition of anonymity, talking about the same with a top government official, the insight came as a total revelation.
He said that in the nonexistence of specified rules about giving or withholding a newspaper(s) of government advertisements for a specific time frame, it remains the prerogative of the political administration in power.

“advertisements are always given out based on the target audience and readership. When a ministry has to give an ad, it particularizes the unpolished content of the ad to the BOC and seeks a media list. This is usually around 15 days before an advertisement has to be published.”

The media list prepared is mainly a mix of newspapers which have a good reach among the specific target audience.

“However, some names are later chucked out of the media list after a verbal conversation to BOC from the top executives of the government. The names are usually of those newspapers or magazines which have carried negative reports on the government. Withholding a publication of government advertisements is used as a penalizing measure,” the official said.

The official said while this trend has been observed under Congress governments too, such bans then lasted for a shorter period. Earlier, publications like Gujarat Samachar and Rajasthan Patrika had also been withheld government ads.

“Denial of government advertisements to certain publications has grown in the last few years, and they are usually for an indefinite period,” the official said,

adding that nothing is ever in writing and only verbal instructions are issued from higher-ups in the government.

In such scenarios, the Newspapers can approach the courts and ask for justice. It not only affects the newspapers but it affects the general readers as well, a statement said this, the other official said that
“For instance, if there is an advertisement on the Mudra scheme, and if The Hindu, which has a large reader base in the south, is not given that advertisement, readers in that region would never get to know of it,” this official said.

During the conversation with the officials, we came to know that If the publications are blacklisted because of censure from media watchdog Press Council of India (PCI), their names are posted on the government website. But, if they are kept out of government advertisements because of political decisions, there is no notification in the public realm.

Even when the PCI censures a publication for paid news or fake news, the discretion of how to penalize a publication lies with the BOC or the respective state governments. And this penalty is often in the form of a denial of government advertisements to the censured publication.

The other side of the story- as they say

Government insiders had earlier expressed that the Modi government feels that advertisements, particularly to national newspapers, are a ‘waste,’ and serve no purpose.

“The government believes in other forms of communication, and when it comes to advertisements, it is keener to distribute ads to regional publications,” an official said.

However, the situation is different for political advertisements, which are given in large numbers to all media houses. This is because the advertiser wants to ensure the message reaches the maximum number of people.

There is a reason why the term defense mechanism exists and that too many people use it for their good.
Whatever the case is, we are going to focus on Paneer.

Inputs from The Print

No GST On Residential Premises If Rented For Personal Use: Government

Covid-19: Ahead of Ram Navami, Yogi calls for ‘isolation’