On Camera, Man Washed Away While Crossing Swollen River In Uttarakhand - Govt.in - Telling the truth- always! 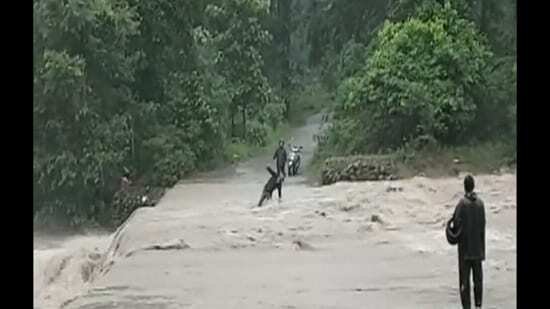 A terrifying video showing a man getting washed away in a heavy flowing river in Uttrakhand has surfaced on the internet. The man, whose identity hasn’t been revealed, is still missing and a search operation is currently underway.
The clip was shared by news agency ANI on Twitter. The caption of the post informed that the “young man washed away due to a strong current in a rainy drain in the Fatehpur area” of Uttarakhand.

In the video, the man appeared to be crossing a swollen drain on his foot. Moments later, he was seen getting carried away by the river after he failed to resist the strong currents.

According to ANI, Sub Divisional Magistrate (SDM) Haldwani Manish Kumar Singh said there is no trace of the young man yet.

Meanwhile, this incident comes almost a week after a cloudburst in a border village of Nepal triggered a flash flood in Khotila village on the Indian side. Waters of the swelling Kali river rushed into homes, filling them with sludge and killing a woman. The body of Pashupati Devi was pulled out of the sludge that had choked her house after the flooding of the river.

The woman killed in the incident did not get the time to unbolt the door of her house and run to safety, Pithoragarh District Magistrate Ashish Chauhan said. He also added that around 170 affected people of the village were evacuated and put up in makeshift shelters built at Dharchula Stadium.

Gautam Adani Back To Second-Richest, Was No. 2, Then No. 3 On Friday
Arunachal Pradesh NEET 2022 Counselling: Round 1 Registration Ends Today; Direct Link Here