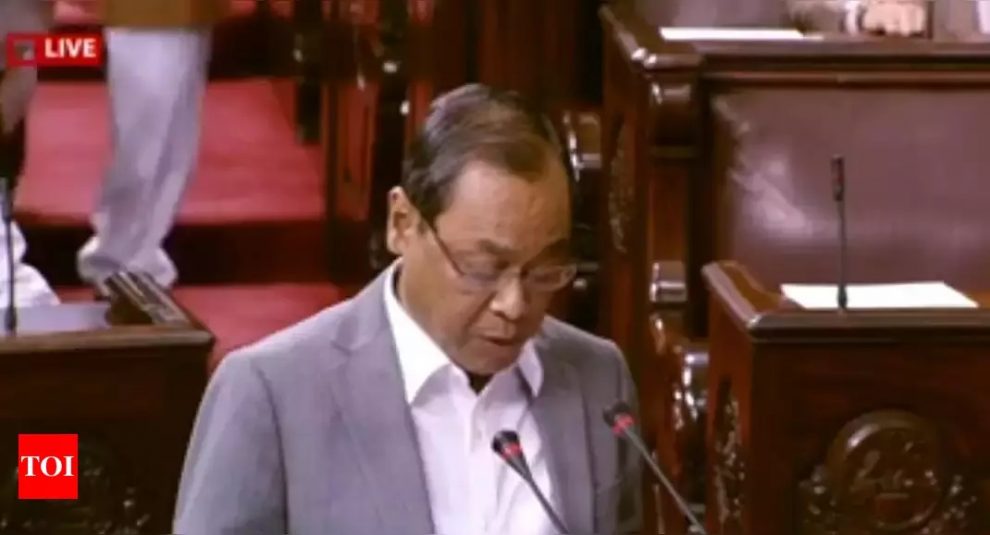 NEW DELHI: The oath ceremony of former Chief Justice of India Ranjan Gogoi as Rajya Sabha member on Thursday was marred by slogan-shouting by the opposition, while the treasury benches welcomed him to the House with thumping of desks.
The Congress and Left MPs targeted Gogoi on his nomination to the Rajya Sabha by President Ram Nath Kovind.
As the former CJI entered the Well of the House to take oath as a member, the opposition members, especially Congress legislators, stood up to register their protests and raised slogans before staging a walkout.
Congress leader Anand Sharma, speaking on the issue outside the House, said that Gogoi’s acceptance of Rajya Sabha nomination has raised a lot of questions. “He has been given the gift of delaying the judgments. We condemn and oppose it,” said Sharma while citing the reason for staging a walkout.
Samajwadi Party MP Jaya Bachchan, without naming anyone, commented on the relevance of the #Metoo movement. “I want to know what has happened to #Metoo movement. And those people who occupied high positions and troubled their subordinates … I do not want to say anything as it would be unparliamentary. Those should be tested who have misused their position. There is no respect … Beti Bachao Beti Padhao (they say). Daughters can study only when they live,” Bachchan said.
However, Ramdas Athawale, minister of state for social justice and empowerment, criticised Congress leaders for their comments on the ex-CJI inside the House.
“This is an important decision. He was the Chief Justice of India and the President nominated him. Congress is unhappy and it keeps opposing the government’s decision. They staged a walkout. It was not good,” added Athawale.
BJP national general secretary and MP Anil Jain too targeted Congress for raising slogans against Gogoi in the House even before he took an oath.
“It is unfortunate. Congress is behaving in a weird manner. He is a tall figure in the legal circle. We do not know who guides Congress. The Congress has not just nominated members of the judiciary to the Rajya Sabha member but they have also been accommodated as ministers. They had KTS Tulsi,” Jain told ANI.
Earlier in the day, Gogoi took oath as a Rajya Sabha MP. Gogoi’s wife Rupanjali Gogoi, daughter, and son in law were also present in Parliament. President Ram Nath Kovind had nominated the former CJI to the Rajya Sabha on March 16. Gogoi served as the 46th Chief Justice of India from October 3, 2018, to November 17, 2019.
On November 9, 2019, a five-judge Bench headed by him had delivered the verdict in the long-pending Ramjanmabhoomi case.