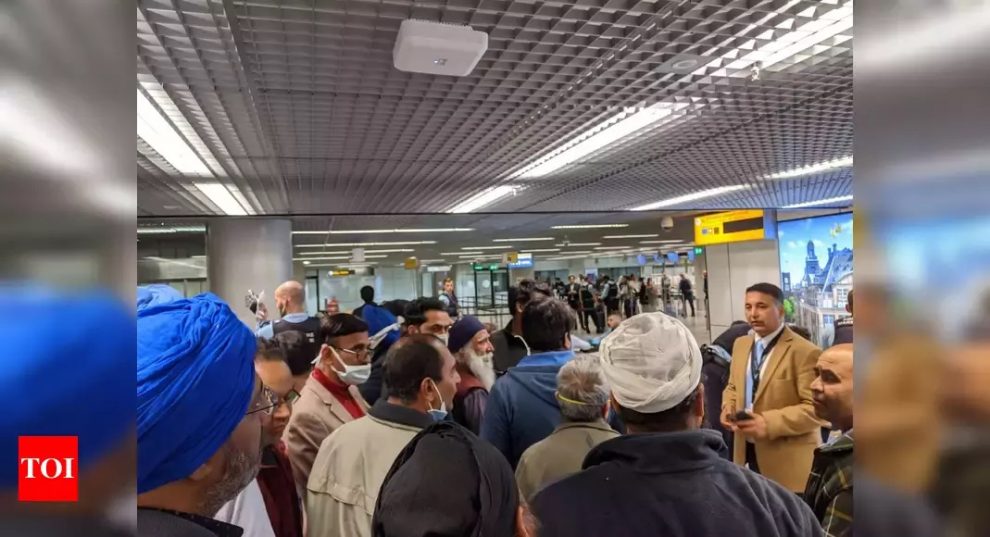 NEW DELHI: Close to 100 Indian nationals stranded at Amsterdam airport amid coronavirus scare have urged the government to rescue them alleging that authorities did not allow their flight to land when it was just two hours away from New Delhi airport. A passenger also questioned why flights were being flown empty when there are passengers ready to embark.
A Twitter user by the name of Manju Pagarani expressed her anguish in a tweet on empty flights being flown to New Delhi leaving behind Indian passport holders stranded at the Amsterdam airport.
“This is our third day being stranded at the Amsterdam airport. We got to know that a flight is flying to New Delhi to bring travellers back to the Netherlands who are stranded in India. But that flight is flying empty and could have taken the Indians along who are stranded here at Amsterdam. We have been told that the Indian government will send a special flight for us. But why send a special flight when a plane is already flying from here to New Delhi,” she said.

Pagarani urged the government to allow them to embark flights which are headed for New Delhi.
Tina Sapra, wife of a passenger who is also stranded at Amsterdam airport has written to the Civil Aviation Minister Hardeep Puri pleading to help her husband and other stranded at the Amsterdam airport, reported IANS.
“My husband is among 100 others passengers in Amsterdam, Netherlands, where they have been stranded. They were turned back mid-air when the flight was just two-hours away from the Delhi airport. All these passengers, which include pregnant women and senior citizens, are Indian passport holders,” Sapra told IANS.
Detailing on the ordeal faced by her husband and other co-passengers, Tina said the outbound flight from Chicago with thoroughfare to India was booked within advisory period, but the flight from Amsterdam to Delhi was redirected.
She added the officials at the Delhi airport allegedly suspected the origin of this flight was from Europe.
“This has led to an emotional turmoil, confusion, stress and undue personal hardship. There is no helpline or senior official to address our grievance,” Sapra said.
Tina in her letter to Suri sought Indian government’s intervention to bring the passengers who have been stranded on account of Indian government’s confusing advisories, which she said impacted travel and movement of transit passengers not originating from Europe.
The Indian government had announced on Thursday that international flights will not be allowed to land in India starting March 22. However, the passengers stranded at the Amsterdam airport said that their flight which started from the US was denied landing at New Delhi and was asked to return as the authorities suspected it to originate from Europe.