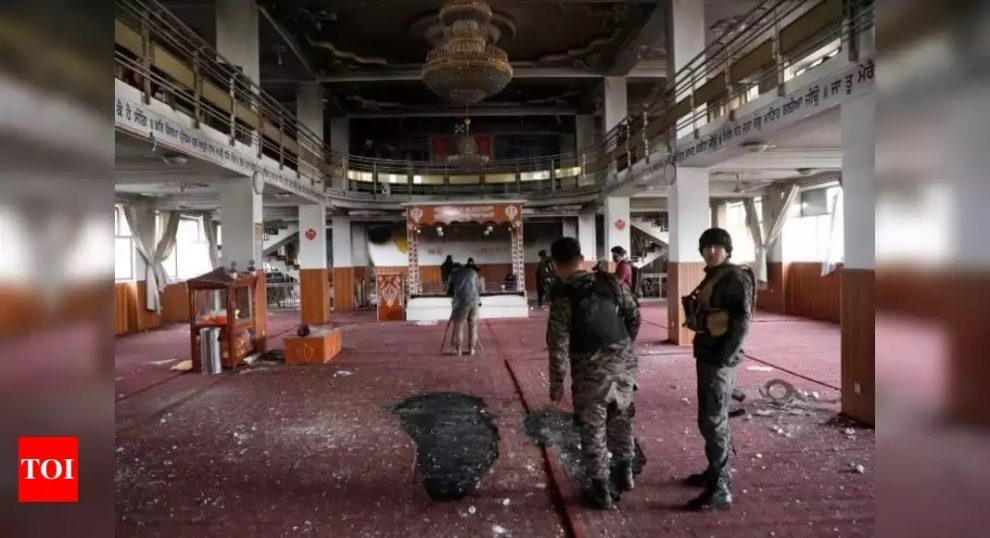 NEW DELHI: While the ISIS-Khorasan claimed responsibility for the devastating terror attack on a gurdwara in Kabul on Wednesday, India’s security establishment believes the actual perpetrators of the attack are the Haqqani group in cahoots with the ISI of Pakistan.
The attack, which claimed the lives of 27 people, Sikhs and other faiths, drew sharp criticism from India. In a statement, the MEA spokesperson said, “Such cowardly attacks on the places of religious worship of the minority community, especially at this time of Covid-19 pandemic, is reflective of the diabolical mindset of the perpetrators and their backers.”
After the initial claim of responsibility, a second statement purportedly by the ISIS said the killings were revenge for Indian actions in Kashmir. If the first statement was not enough, the second made it clear that this was a Pakistan agenda at work, senior security officials here said.
Hussain Ehsani, a researcher in Kabul working on fundamentalist groups like ISIS-Khorasan said he believes the attack happened because the Haqqani group and their collaborators, Lashkar-e-Taiba together wanted to take revenge on India for the recent riots in Delhi. “The best place for revenge is Afghanistan. The collaboration between Lashkar-e-Taiba and the Haqqani group, indicates us that LeT and Haqqani group accomplished this attack.”
It should be remembered that the chief of the Haqqani group, Sirajuddin Haqqani, is also the deputy leader of the Taliban. Both groups are supported by Pakistan’s ISI.
Just last week, the Taliban, in a post on their official website stated they had virtually wiped the IS-Khorasan from Afghanistan. “Special forces of the Islamic Emirate, after Zabul, Jawjzan and Nangarhar defeated ISIS in Kumar province and destroyed its fort and wiped it out from across the country. Taking shelter in the Singhlakh mountains and hiding there, they planned to re-organize the group with their supporters, but the Islamic Emirate of the Islamic Republic took the initiative to silence the last voice of the ISIS.” If the ISIS has been effectively “removed” from Afghanistan as the Taliban has claimed, how did they conduct an attack of the magnitude of the one on Wednesday?
So, why did the ISKP/ISIS claim responsibility for today’s attack? Ehsani says its a kind of shadow game being played by the Haqqani group. “A number of attacks have been executed in Kabul recently, with responsibility being claimed by the ISIS. But the ISKP does not have tactical and strategical capabilities for executing such complex attacks. The Haqqani group realised the importance of ISKP brand and put itself behind the scenes.”
This is borne out by the preliminary investigations by the Indian security agencies. Pakistan, working through the Taliban-LeT-Haqqani combine, is seen to be behind today’s attack, possibly the worst against the Sikh minorities in Afghanistan. As investigators sift through the evidence in Kabul, the Indian government is more convinced that Pakistan was behind the attack, which happened just a couple of kilometres away from the city’s most secure green zone, implying a degree of sophistication that the ISIS-Khorasan is not known to possess.
In a recent report by the Afghan Institute of Strategic Studies, the authors quoted Afghan security experts like Amrullah Sales as saying, that ISKP is “the manifestation of an ‘intelligence game’ being played by Afghanistan’s neighbors.” Saleh said, “the presence of ISIS in Afghanistan is not genuine. It is an intelligence game played by some of our neighbors.” Pakistan, the report says, supports the ISKP as part of a “hedging strategy.”
The timing of the attack, sources here said, should be seen in the context of the prevailing political and security situation in Afghanistan — the uncertainty of the peace process, the unstable government and the relative disinterest of the US post the peace deal with the Taliban.
Indian security sources believe this could be the beginning of more Pak-sponsored attacks against Indian interests in Afghanistan in the coming weeks and months.

US welcomes release of former J&K CMs Farooq, Omar
Tolling on NH network to be suspended till April 14

How Tablighi movement split into two groups two years ago