PM Cares Fund has to be transparent: Congress - Govt.in - Telling the truth- always! 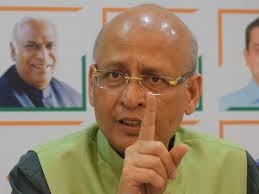 NEW DELHI: After Congress chief Sonia Gandhi questioned the PM Cares fund and said it should be utilised for welfare of the migrants, the Congress has stepped up its attack, with senior party spokesperson Abhishek Manu Singhvi on Wednesday saying that the fund, which is the PMO’s pet project, should be made “transparent”.
He alleged that a “humongous” amount of money has been taken through donations and “Ceaser’s wife cannot be above suspicion”.
Coronavirus lockdown: Latest updates
Singhvi tweeted: “It’s been over a week asking PMO India Narendra Modi and HMO India, the account of the humongous amount of money taken as donations by PM Cares but to no avail. Ceaser’s wife can’t be above suspicion and thus, PM Cares, a pet PMO project has to be transparent.”
“Government can spend nearly Rs 100 crores on transport and food, etc. for just one public programme in Gujarat, when the Rail Ministry has the largesse to donate Rs 151 crores to the PM’s corona fund, then why can’t these essential members of our nation’s fabric be given a fraction of the same courtesy, especially free rail travel, at this hour of acute distress?”

On May 4, Sonia Gandhi had said in a statement that the party will bear the cost of the travel of the migrants after it came to light on social media that migrants were charged for railway tickets to ferry them across the country to their respective home states.
She had said, “I hoped that thousands of crores which came in the name of charity will be used for nation builders and they will be provided free travel, but I am pained this has not been done.”

Kamal Nath’s ‘hit the street then’ remark at Scindia led to our exit: Ex-Congress MLAs