PM warns of tough action against those misbehaving with frontline staff, asks people to cooperate with administration - Govt.in - Telling the truth- always! 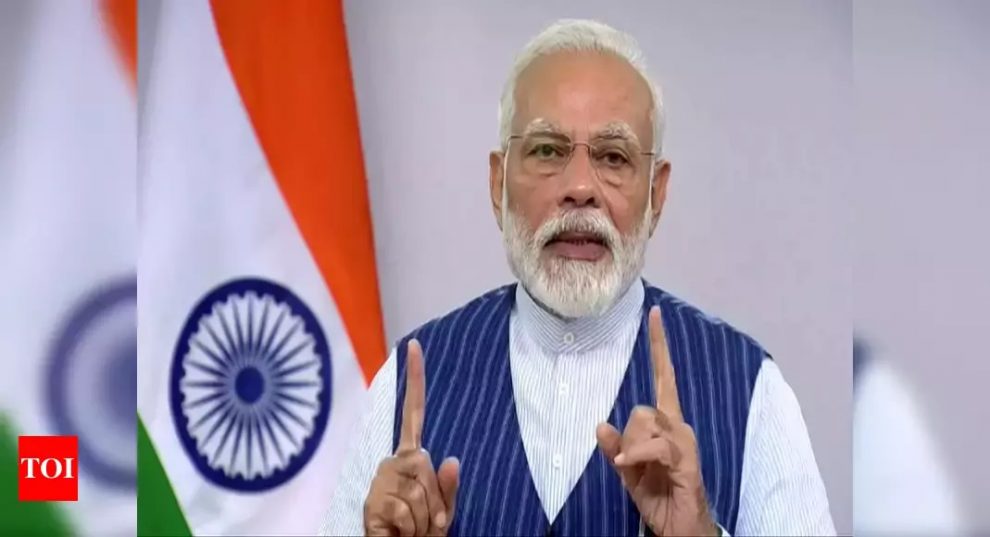 NEW DELHI: Prime Minister Narendra Modi on Wednesday warned of tough action against those misbehaving with people on the frontline of the fight against coronavirus like doctors and airline crew, and sought the cooperation of citizens with the administration to deal with the crisis.
Modi chose a video interaction with residents of Varanasi, the constituency he represents in Parliament, to respond to several queries related to the pandemic and his government’s response to it, and asserted that focusing on a few incidents of shortcomings will not help at this hour.
If he claimed that all is well, then he would be deceiving himself, the prime minister said, and then added that what is a more important question is that whether the pandemic has to be defeated or not even if it means facing certain difficulties.
Even in normal times, people face certain problems, he said.
Noting that ‘Navaratri’ has started from Wednesday, he asked people to take care of nine poor families on each of the nine auspicious days, saying nothing can be of more devotion to goddess Durga.
“Karuna” (compassion) is also a step toward defeating the coronavirus, he said to a question about difficulties being faced by the poor and daily-wagers during the lockdown across the country.
The Centre and states are taking measures to help them, he said. “The difficulties being faced are only for 21 days. But if the coronavirus crisis is not over and its spread is not stopped, then we cannot imagine the harm it will cause,” Modi said.
Asked about reports of misbehaviour with medical personnel and airline crew, he said he was pained by this and has asked the home ministry and state DGPs to take tough action against culprits.
If anybody targets doctors, nurses and all those rendering their service during this crisis, then it will cost them dearly, Modi said, adding people in white like doctors and nurses are like gods.
He also asked people to cooperate with the government and the administration, and not to pressure them, for better results during the lockdown period.
“There may be incidents of some shortcoming or negligence. But looking for such cases and focussing and publicising them, discouraging some sector will not benefit at this time. There can be a thousand reasons to spread pessimism. I am not saying they are all wrong but life runs on hope and trust,” he said.
Doctors, police personnel and many others have been working very hard and should be encouraged, he said.혻
Modi also asked people to shun superstition, rumour and self-medication and emphasised his message of self-distancing if the battle against the deadly virus has to be won.
“The war of Mahabharata was won in 18 days and our effort is to win this war against the coronavirus in 21 days,” he said, noting that over one lakh of COVID-19 patients have recovered the world over and many dozens have in India as well.
This disease does not discriminate between the rich and the poor, among regions and infects even those very conscious about their health, he said, adding that social distancing is the only way out and people should have patience and should follow guidelines.
The government has joined hands with WhatsApp to start a help desk, and people can get proper guidelines about the virus by contacting a number (9013151515), the prime minister said.
Kashi, another name for Varanasi, can show the way to the country with its patience, coordination, empathy, peace, tolerance, service and solution, he said, noting that the holy place is known for annihilating sins and crisis.

Don’t cancel e-tickets on your own: IRCTC