Post-lockdown, a fumigation gate could greet you at work - Govt.in - Telling the truth- always! 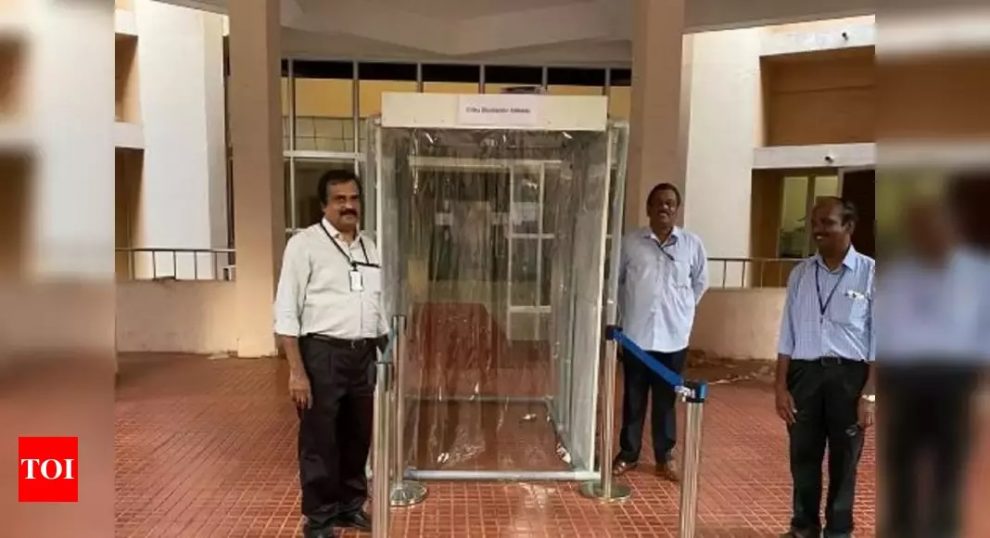 NEW DELHI: Those returning to offices when India lifts its lockdown may be greeted by fumigation chambers at the door. The ministry of science and technology has approveddevelopmentof fumigation chambers that use hydrogen peroxide to disinfect a person’s body and clothes. It has also given its nod to booths equipped with ultraviolet light which minimise contact between doctors and patients while also decontaminating surfaces.
While the fumigation chamber is basically a gateway which will be placed in educational institutions, shopping malls, government offices and apartments, the boothis meantfor use in hospital settings.
Prototypes for both were developed by Sree Chitra Tirunal Institute for Medical Sciences and Technology (SCTIMST), Thiruvananthapuram. For commercial use, fumigation chambers are being developed by HLL Infratech Services Limited (HITES), a governmentof India undertaking, while the booths will be manufactured by Hindustan MachineTools in Kerala. “Both are likely to cost less than Rs 25,000 for each unit,” said a source, adding that 50unitsof the fumigation chamber were already under development.
The hydrogen peroxide fumigation chamber is fivefeet-wide and measures seven feet in height.It takes five seconds to decontaminate. Asha Kishore, director of SCTIMST, said the system is electronic. “Sensors fitted in the chamber detect entry and tubes will emit puffs of hydrogen peroxide. There is no odour or dampness. When person exits, UV system will decontaminate the space.”
According to the department of science and technology,this was the safest prototype of a fumigation chamber. Kishore explained, “An individual will be exposed to only 1/50thof theupper limit of hydrogen peroxide prescribed by the World Health Organization guidelines”.
Their other design — a booth — could help doctors minimise contact with patients. “The booth has an entry tunnel on the side so a doctor can use a stethoscope to examine a patient who sits in the chamber.They can see each other through a glass wall. After examination is complete, the patient leaves and the UV lightis turned on for three minutes to decontaminate it,” added a DSTscientist.