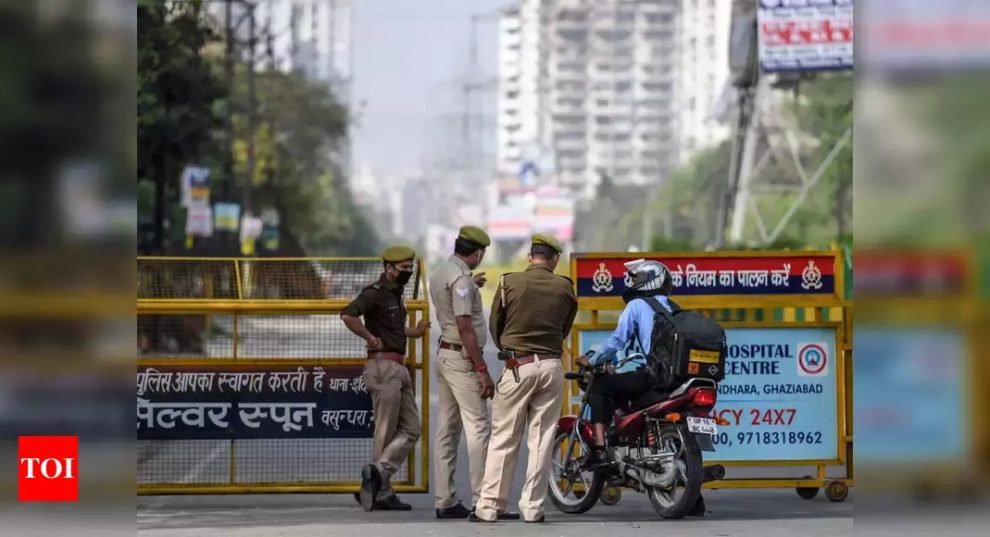 LUCKNOW: More than the lockdown, it is the proactive policing that is emerging as a major problem for the common man in Uttar Pradesh, as people are not yet able to wrap their head around the still unfolding emergency in the country due to the COVID-19 outbreak that has already claimed 16,559 lives and infected over 3.8 lakh people globally.
Police have had to put up their aggressive avatar to keep people at home. Residents, who have had to sit at home for two days now, have found that to be rude and complain that police is misbehaving with citizens who come out of their houses to buy essential commodities, mainly medicines.
The police have launched a new strategy to check the crowds by shaming them in cities like Agra and Bareilly.
People who could not give a ‘satisfactory’ reply about their presence on the road, were asked to hold posters which said, “Main samaj ka dushman hoon. Main mooh par mask nahin lagaunga” and ‘Main samaj ka dushman hoon, main bina kaam ke bahar ghoomonga’, and photographed.
One of the boys who was shamed and photographed, said, “The police think that they have the right to insult the public. I told them that I was on my way to the bank and they asked me to prove it. They forced me to pose with the posters. The doctors are saying that everyone need not wear a mask but the cops do not listen.”
In the absence of clear directives, the police also prevented paramedical staff from going to work.
More on Covid-19
* Coronavirus pandemic: Complete coverage
* Coronavirus: What are the symptoms
* 52 testing sites for coronavirus in India
* Helpline numbers for states and UTs
* Do fever and cough mean you need Covid-19 test?
* How to stay safe
* How to quarantine yourself at home
A female private nurse, who is tending to an old woman, was abused when she was on her way to her house on Monday evening. Her brother, who was accompanying her, was caned.
A retired bank officer who had gone out to buy fruits, was also ticked off and told to return home without making purchases in Narhi area.
A vegetable seller said that the cops did not allow him to open his shop. “The cops said if you open the shop, people will come out to buy,” he said.
Media persons, particularly women journalists and those from the print media who do not carry cameras, are being targeted by the policemen in Lucknow.
A woman journalist who was on her way to the petrol station was asked ‘Why do you need petrol?”
Another elderly scribe was subjected to abuse when he accompanied his grandson to the bank.
In Prayagraj, cops deployed at barricaded points can be seen watching videos on their phones and if anyone approaches them for assistance, he is greeted with a barrage of cuss words.
An elderly lady who had suffered a fracture and was on her way to a hospital, was rudely turned back from the Civil Lines area. “Ghar baitho (sit at home),” a policeman told her husband and the couple had to return home.
As the lockdown entered its second day on Tuesday, a number of essential committees went missing from the odd shops that were open.
Milk and bread were in short supply and prices of vegetable sky-rocketed with tomatoes selling at Rs 120 per kg and potatoes at Rs 40 per kg.
“Trucks carrying vegetables are now being allowed on roads and since supplies are falling, our stocks are also running low,” said Abdul Rahim, a vegetable seller in Narhi area.
Most of the medicine shops in Lucknow did not have insulin injections which are a must for diabetic patients on Tuesday because the police had stopped entry of mini-trucks that bring in the insulin maintaining a cold chain.