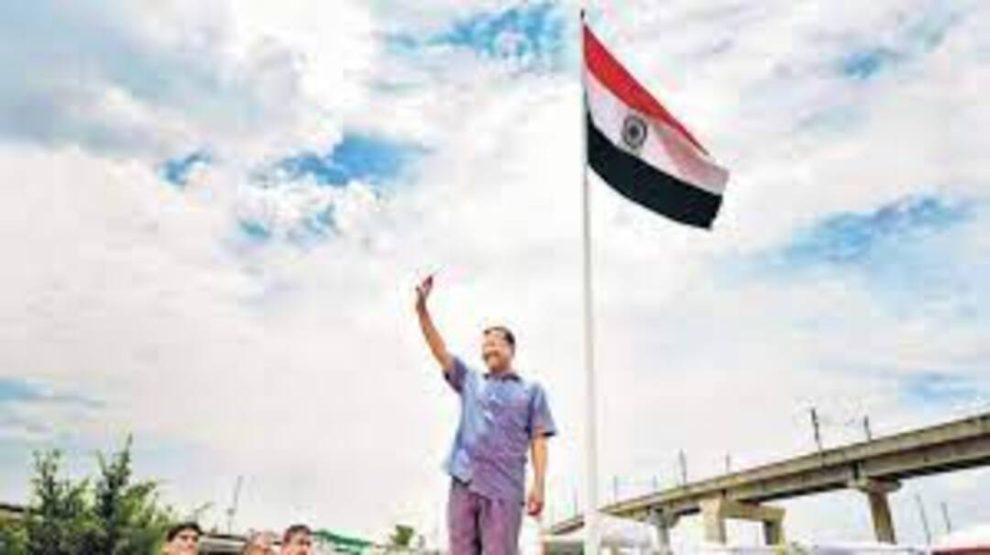 Delhi News : The move to target the BJP and the Congress comes amid the AAP’s preparations to contest the upcoming assembly elections in Gujarat and Himachal Pradesh. Delhi CM Arvind Kejriwal was speaking on Tuesday at an event in east Delhi, where the AAP government unveiled the 500th national flag in the national capital.

Providing quality education and health care is the duty of a responsible government, Delhi chief minister Arvind Kejriwal said on Tuesday, continuing his attack on the central government over so-called freebie politics ahead of assembly elections in Gujarat and Himachal Pradesh.

“The income-tax department, CBI (Central Bureau of Investigation) and ED (Enforcement Directorate) are conducting raids on a lot of people, but not their friends. Entire country is being run for a few friends. Earlier it was being run for a single family,” Kejriwal said in a veiled attack on the Bharatiya Janata Party and the Congress.

Kejriwal made similar remarks during a digital address on Monday. The move to target the BJP and the Congress comes amid the AAP’s preparations to contest the upcoming assembly elections in Gujarat and Himachal Pradesh. After Delhi and Punjab, AAP has been recognised in Goa as a state party by the election commission. If it is recognised in one more state, the AAP will become a national party, which would boost its chances in the 2024 general elections.

“After Delhi and Punjab, AAP is now a state recognised party in Goa too. If we get recognised in one more state, we will officially be declared as a “national party”. I congratulate each and every volunteer for their hard work. I thank the people for posing faith in AAP and its ideology,” Kejriwal said in a tweet on Tuesday.

The AAP has also sought to intervene in a public interest litigation in the Supreme Court, saying electoral promises such as free water, electricity and public transport are not “freebies,” but merely a state discharging its “constitutional responsibilities” to create an equitable society.

Kejriwal was speaking on Tuesday at an event in east Delhi, where the AAP government unveiled the 500th national flag in the national capital.

“I don’t understand what a freebie is at all. Where will poor children go if we close government schools or ask them to pay fees? There are 39 countries in the world that offer free education for everyone. How did these countries become rich powers? Through free education for the masses. Free education, free health care and employment must be fundamental rights,” Kejriwal said.

In the 2021-22 budget for Delhi, the AAP government had announced that it will install 500 national flags across the capital, a move aimed at instilling patriotism among the people to mark the 75th year of India’s Independence. The tricolour hoisting exercise got underway in November last year.

On the 75th year of Independence, people should think how so many countries have overtaken India and why does our country India lag behind, Kejriwal said.

“We should take a pledge to end parivarwaad and dostwaad from the country. The government’s money will not be spent on a family or few friends, but on the education and employment of poor children. It will be spent on providing free public health care to the people,” he said. “Only bharatwaad (nationalism) will reign supreme in this country and parivarwaad and dostwaad will end.”

“The goal behind this project (installing poles to fly 500 national flags) is to invoke and inculcate deshbhakti (patriotism) in every citizen every day,” Kejriwal said, adding that everyone should take a pledge to make India great.

Delhi BJP spokesperson Praveen Shankar Kapoor, meanwhile, accused Kejriwal of misusing the Independence celebration week to make “unfounded and baseless political statements”. “While the central government is working hard to make people self-dependent and capable to pay for all their needs, Kejriwal’s politics revolves around freebies because he has not done anything for the people on the basis of which he can seek votes,” Kapoor said.

“Kejriwal should be aware that most of the loans lost by banks are those given during UPA regime, so Kejriwal should ask Congress leaders about it,” Kapoor added.
(Except for the headline, this story has not been edited by GOVT.in staff and is published from a syndicated feed.)