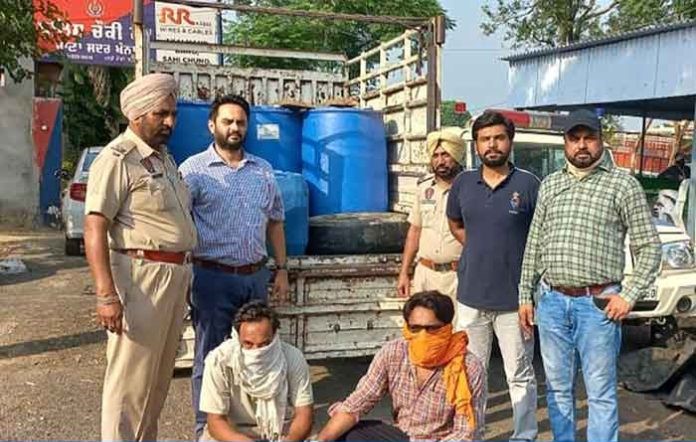 The Punjab police along with officials of the excise and taxation department on Monday seized 2,000 litres of extra neutral alcohol (ENA) near Doraha in Ludhiana district and arrested two persons in this connection.

Disclosing this here, an official spokesperson of the excise department said that ENA is the raw material from which liquor is made and incase any uncontrolled toxicity creeps in, it could result in a major tragedy like the one which happened two years ago in Tarn Taran, Amritsar and Gurdaspur districts that claimed the lives of around 130 people.

The spokesperson said that a naka was set up at Ludhiana-Chandigarh road near Doraha on the basis of secret information.

“The vehicle number PB09 N 9001 fled away from the naka and was then chased till Doraha. Two persons Gurvinder Singh and Sukhdev Singh, both residents of Chiddan village, Amritsar have been arrested on the spot,” he added.

The spokesperson said that 8 drums of 200 liters each and 6 jerry cans of 30 liters capacity each of ENA was recovered from their possession. He said that the vehicle has been impounded and FIR would be registered after further investigation.