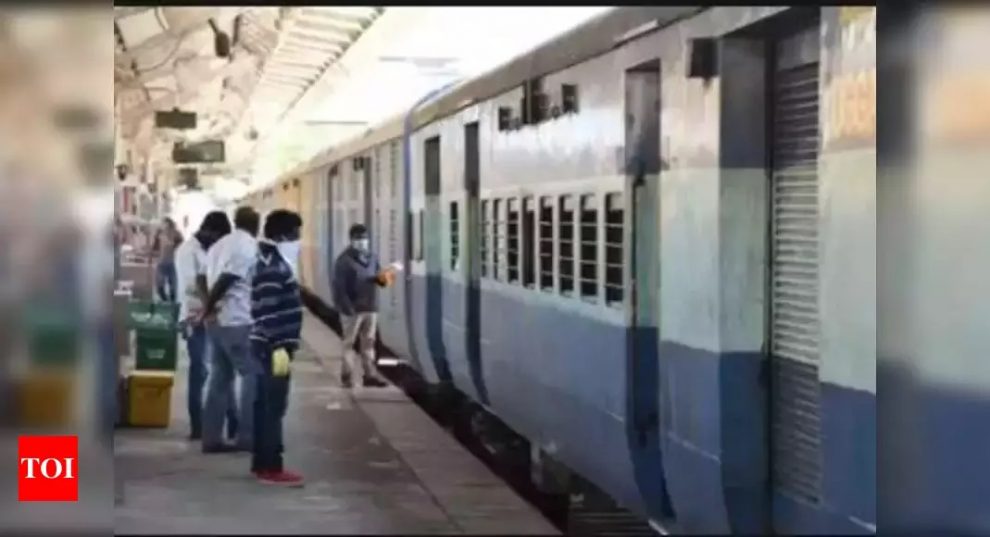 NEW DELHI: From making passengers wear masks to using the Arogya Setu app to check their health status before allowing them to travel and encouraging social distancing on board are a few proposals that Indian Railways is mulling as it prepares to gear for the end of the 21-day lockdown on April 14.
While no decision has yet been taken on when the passenger services, which were suspended in the wake of the coronavirus lockdown, will be resumed, officials said it is likely to be done in a phased manner after the green signal from the government.
A decision, officials said, is likely to be taken in the coming week on how to restore services.
The railways, officials said, has discussed the option of resuming services only on specific approval of each train from the Railway Board. Suggestions for phase-wise planning have to be provided by the zone to the board.
More on Covid-19
“These are sensitive times and we are not looking in terms of revenue generation for now. The focus is on passenger safety and to ensure that the disease does not spread. Trains will run in due course, once the government gives us the green signal. However as of now, we have not taken any decision yet,” said a senior officer.
In the zones, officials are also identifying trains and routes which can be resumed with the approval of the board. The focus, say officials, is to see if routes catering to migrant workers can be resumed initially and also those that are not travelling or has halts at COVID-19 hotspots.
Officials added the railways will also have to factor in how the lockdown is eventually opened. If it is selective, then trains will only run in areas where lockdown is lifted, officials said.
Railways is also unlikely to rescind a March 19 order suspending all concessions for passengers except those offered to patients, students and people with disabilities in a hurry, even after the lockdown period to discourage unnecessary travel.
Railways, officials said, are also discussing protocols that need to be followed once services begin to ensure safety of passengers. They are mulling options like thermal screening and other methods to screen passengers boarding trains.
“Once the services are resumed, we are thinking of requesting passengers to wear masks as per the health ministry advisory. We are also thinking of using the Arogya app to check the health and wellness of patients and allow only healthy passengers to board trains,” an official said.
As part of its preparedness, the Indian Railways has also asked zones to ensure the security of coaches parked in depots.
Officials say once the services resume full throttle, they expect overcrowding at stations and measures have to be chalked out on how to deal with them.
The focus now for railways, the officials said, is to ensure that the rakes of passenger trains which were suspended due to the lockdown had returned to their respective bases, received proper maintenance like charging of batteries, cleaning of bio-toilets, and were ready to return on the tracks once the resumption of services is announced.
Officials also said railway minister Piyush Goyal is keen that the railways concentrate on ensuring that the different railway zones continue their efforts towards contributing towards the larger fight against coronavirus.
Railway PSUs have already committed to converting around 5000 coaches as isolation wards initially which are likely to be sent in rural areas which does not have hospitals, has offered its hospitals for infected patients and are also producing essential medical goods like masks, sanitisers, PPEs.
The minister has given instructions that proper planning should be done of cleaning of linens, sanitation and proper disposal of biomedical waste that is expected to be generated at hospitals and isolation coaches.