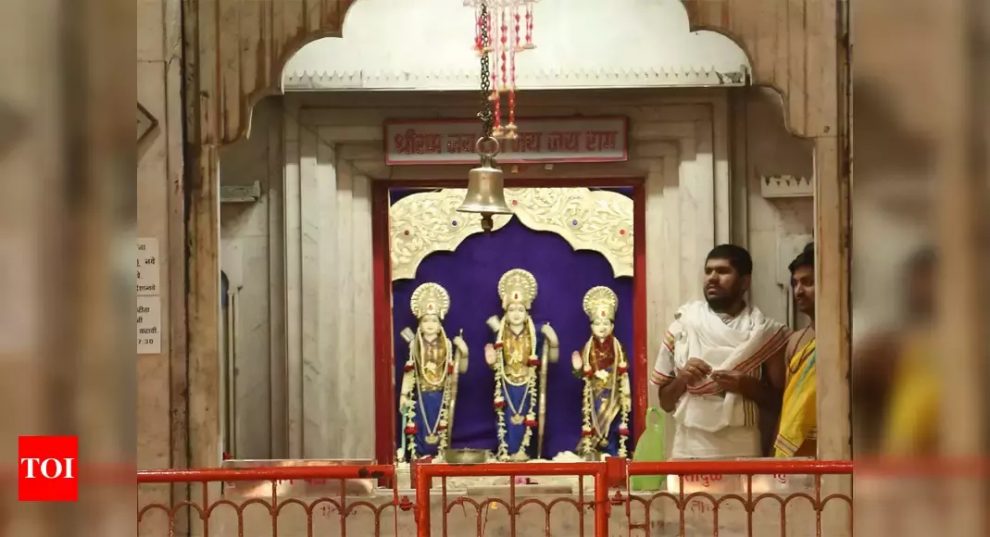 AYODHYA: The idol of Ram Lalla was shifted to the new makeshift temple at Manas Bhawan here at 4.a.m on Wednesday on the first day of ‘Navratri’, amid pealing of bells and clanging of gongs.
The deity has been seated on a silver throne, weighing about 9.5 kilograms. The throne has been ‘gifted’ by the Raja Ayodhya Vimlendra Mohan Mishra, who is also a member of the Shri Ram Teerth Kshetra Trust. The intricately carved throne has been made by artisans from Jaipur.
Uttar Pradesh Chief Minister Yogi Adityanath, who had reached Ayodhya late on Tuesday night, was present at the rituals held for the shifting of the deity and participated in the “puja”.
The makeshift temple structure, built over 432 square foot, is made of fibre and is bullet proof.
The new temple, which is bound to attract thousands of devotees as soon as the lockdown is lifted, has separate entry and exit points which will make “darshan” more convenient.
The head priest of the Ram Lalla temple, Acharya Satyendra Das said that after a gap of 28 years, the deity would finally have a roof over his head.
The shifting of the deity has taken place to enable construction of the grand Ram temple at the site.
Meanwhile, the rituals related to shifting which began on Monday were held amid tight security with limited presence of priests and trust members.
Security personnel had been deployed to prevent local people and devotees from collecting at the site.
Meanwhile, prominent temples in Ayodhya, including the ‘Hanuman Garhi’ have been shut down in the national lockdown though their priests will continue to hold the puja during the Navratri period.
Devotees will be allowed to offer prayers at the new temple on Wendesday, but in small numbers.

‘Coach thought I won’t wake up after having 10 pegs but I scored hundred’: Ex-India star ready to quit alcohol for job

PM Modi to interact with citizens of Varanasi via video conferencing today
No cause for alarm about newspapers: Docs