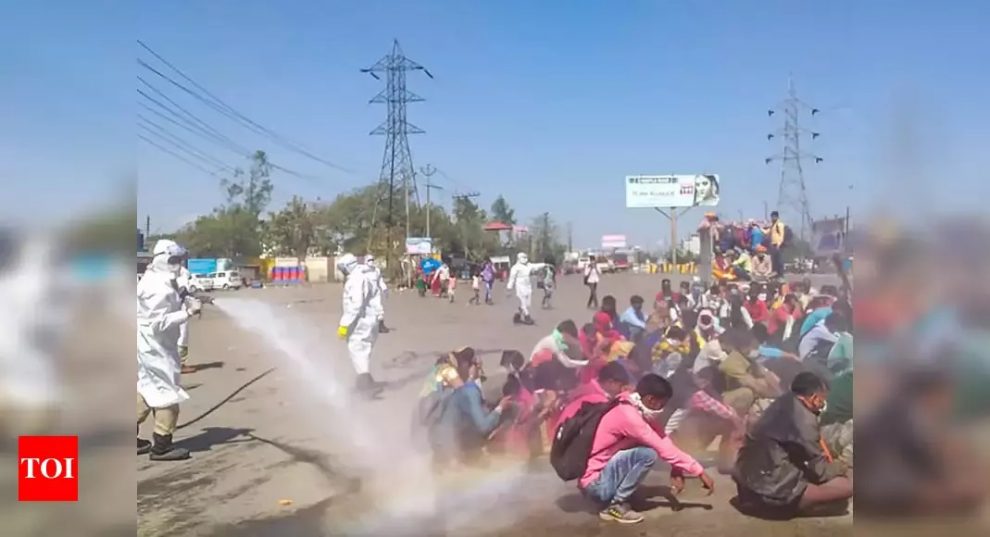 NEW DELHI: A row erupted on Monday after a video showed some officials in UP’s Bareilly district spraying chemicals on migrants who were returning to their villages from Delhi and Noida.
Reacting to the video, the district magistrate of Bareilly, Nitish Kumar, assured action against erring “over-eager” officials who were told to sanitize the buses.
Amid criticism from political opponents, the BJP, cited a similar incident in Kerala a few days back and said that its government in Uttar Pradesh was being unfairly targeted as CM Yogi Adityanath was doing a “good job” in fighting covid-19.
BJP leader Amit Malviya tweeted a video from Kerala in which authorities are seen mass ‘spraying’ people crossing the border.
“This is Kerala, where agencies are mass ‘spraying’ people crossing borders. But all the outrage is reserved for UP, because a saffron clad monk of the BJP is the Chief Minister and is doing a good job!” the BJP leader said in his tweet.

This is Kerala, where agencies are mass ‘spraying’ people crossing borders. But all the outrage is reserved for UP,… https://t.co/XDdGDJW11A

The district magistrate of Bareilly has directed the chief medical officer in the district to provide treatment to those who were sprayed with the chemical.
“The affected persons are being treated under the supervision of chief medical officer. Teams of Bareilly municipal corporation and fire brigade were asked to sanitise the bus but due to over-activeness they did that. Orders have been issued to take action against the concerned,” the DM said in a tweet.

(With inputs from agencies)

Don’t cancel train tickets, you will get refund automatically: IRCTC to passengers